Hindustan Motors had several models in their line up in India. Ambassador was the most popular among them. There are still some well maintained examples of Ambassador in India. Other than Ambassador, Hindustan Motors had Contessa and they also had an SUV called Trekker. Almost everyone would agree that Trekker was not a good looking SUV by any means. However it was extremely practical and that is why it was popular in rural areas as people carrier. It is now a very rare car on our roads and there are some restored examples in India even now. Here we have a video of a 1982 model Hindustan Trekker SUV which has been restored.

The video has been uploaded by Dajish P on his YouTube channel. The YouTuber shows a restored 1982 model Hindustan Trekker in this video. The SUV seen here in the video is actually owned by a tour operator. The car was bought by the current owner from Bangalore in an auction. When they originally bought the Trekker, it came with a soft top but, the previous owner modified it with a custom made hard top roof along with other customisations. When compared to other cars that were available on sale at that time, Trekker had a very unique or different design.

The design was extremely boxy which made it utilitarian. The SUV did not even come with doors from factory. there was a thin metal bar which can be called as a B pillar. The new roof on the Trekker was actually built from a coach factory in Bangalore. The plate from the coach factory is still there on the car. The owner wanted to convert the Trekker into a station wagon which we think was a good idea. The front grille, round headlamps and turn indicators below them are all retained. Hindustan Motors logo has been removed from the front and instead a Station wagon badge has been placed. 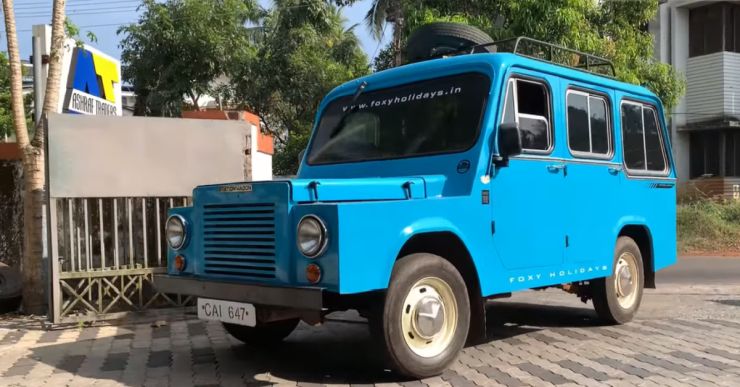 The whole vehicle is finished in Sky Blue shade from the outside. The interior gets dark coloured fabric seats and similar materials are seen on the door pads too. This is a three row SUV with side facing bench seats in the third row. It is not the most comfortable SUV but it does look retro especially with the blue paint job. It looks like the interior work on this SUV is not finished yet. The exterior looks decent but not the interiors. The original engine on this Trekker was replaced with a diesel engine from a Matador van.