Hyundai will be launching the Venue Facelift on June 16th. This is the first facelift that the Venue is getting since it was first launched. Hyundai has made some substantial changes to the exterior and interior as well. Here, we have a detailed video of the 2022 Venue.

The video is uploaded on YouTube by The Car Show. In the video, the host gives us a detailed walkaround of the SX variant of the 2022 Venue. There would also be four other variants namely, E, S, S+ or S(O)and SX(O). The SX sits between the S+ or S(O) and SX(O) variants. The host says that the expected price of the 2022 Venue will start from Rs. 7.25 lakhs ex-showroom and go up to Rs. 12.49 lakhs ex-showroom.

This is the Polar White paint scheme that we see in the video. Hyundai will also offer Titan Grey, Denim Blue, Phantom Black and Fiery Red. You could also get a dual-tone colour that is called Fiery Red with Phantom Black roof. 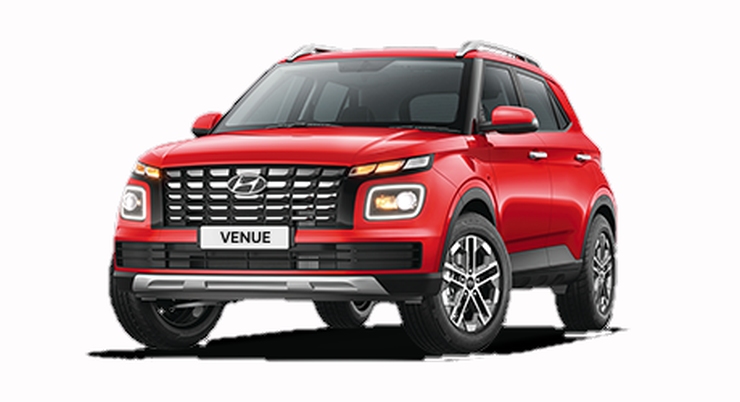 Up-front there is a new parametric grille finished in dark chrome. Hyundai is also using a similar grille design on other vehicles. The Hyundai logo is also finished in dark chrome. There is still a split headlamp unit with a projector setup. But now, the halogen is replaced with LEDs which is a good thing. There are cornering lamps that use halogens. There are no changes to the LED Daytime Running Lamp. The turn indicator housing has received some updates though.

There are 15-inch steel wheels with wheel covers. Hyundai is using 195/65 R15 tyres. Earlier, the wheel size used to be 16-inches. There is an LED turn indicator mounted on the outside rearview mirrors which are electrically adjustable and foldable. There are roof rails too which are not functional.

The rear has been redone heavily. There are new LED tail lamps that are split units. Both of them are connected via a light bar which is first-in-segment feature. The rear bumper is also new which is redesigned and the reverse lamp is placed in the bumper. There is a rear defogger, high-mounted stop lamp, two parking sensors and a rear parking camera.

Then the host climbs into the interior. There is a request sensor placed on the door handle. The interior is finished in a black and beige scheme. The instrument cluster is all-new and is a digital unit. We have seen a similar instrument cluster on the Kia Carens. The steering wheel is now taken from the Hyundai Creta. So, it is a D-cut multi-functional unit that is leather-wrapped. The higher variants also get cruise control.

There is an 8-inch touchscreen infotainment system which has been updated. It does support wireless Android Auto and Apple CarPlay. There is also Bluelink connected car technology, traction control, , an electric sunroof, Amazon Alexa and Google Assistant. There is also automatic climate control, wireless charger, USB port, 12V accessory socket and an armrest with storage space.

Hyundai will be launching the Venue Facelift on June 16th. This is the first facelift that the Venue is getting since it was first launched. Hyundai has made some substantial changes to the exterior and interior as well. Here, we have a detailed video of the 2022 Venue. The video is uploaded on YouTube by…