2022 Maruti Brezza base variant in a walkaround video

Maruti Suzuki will be launching the 2022 Brezza on June 30th. Till now, several details of the new compact SUV have been revealed. You can already book the 2022 Brezza for Rs. 11,000. Now, a walkaround video of the base variant of the 2022 Brezza has surfaced.

The video is uploaded on YouTube by Deepak Verma. In the video, we can see the base variant of the new Brezza at a dealership yard. The compact SUV is finished in a single tone colour white colour. There is thick plastic cladding going throughout the length of the compact SUV. This enhances the SUV look of the Brezza.

There are new headlamps in the front. They are much sleeker than before. It seems like the Brezza would offer a projector setup in the base variant as well. You also get a new grille in the front and a new bumper as well. Because it is a base variant, there are no fog lamps on offer. There are LED tail lamps at the rear and Smart Hybrid badging too. On the sides, there are blacked-out steel wheels. You do get body-coloured door handles and outside rearview mirrors. The turn indicators are placed in the ORVMs. 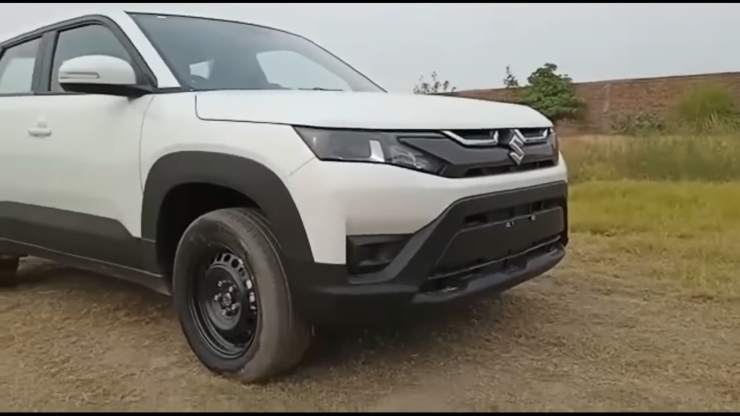 In the interior, the base variant now also gets all four power windows. There is manual air conditioning control. It misses out on an infotainment system and multi-function steering wheel. However, the rear occupants do get rear AC vents. There is an electric adjustment for the outside rearview mirrors but you cannot fold them electrically. There is a 12V accessory socket in the front. The rear occupants do not get an armrest or headrest. It also misses out on a parcel tray. The steering wheel is new and is a flat-bottom unit.

The instrument cluster is redesigned. It has analogue dials for the tachometer and speedometer. Because this is the base variant, it gets the multi-information display from the previous generation.

On the higher variants, you will get a multi-function steering wheel, cruise control, automatic climate control, parcel tray, coloured multi-information display and electrically foldable outside rearview mirrors. There would also be a new larger 9-inch touchscreen infotainment that supports wireless Android Auto and Apple CarPlay. Moreover, there will be connected care technology on offer also. It would also come with a 360-degree parking camera and an electric sunroof.

Maruti Suzuki will equip the 2022 Brezza with the new 1.5-litre, four-cylinder, K12C engine that we have seen on the XL6 and Ertiga. It produces 103 Ps of max power and 137 Nm of peak torque. It comes mated to a 5-speed manual gearbox or a new 6-speed torque converter automatic transmission. If you get the automatic transmission then you would also get paddle shifters mounted behind the steering wheel.

Maruti Suzuki will be launching the 2022 Brezza on June 30th. Till now, several details of the new compact SUV have been revealed. You can already book the 2022 Brezza for Rs. 11,000. Now, a walkaround video of the base variant of the 2022 Brezza has surfaced. The video is uploaded on YouTube by Deepak…