Mahindra launched the current generation Thar in 2020. Ever since its launch, Thar became a popular choice among SUV lovers. It is a capable off-road SUV and there are videos available online that prove the same. Many Indian celebrities have also shown interest in this vehicle and some of them even bought it. Jayasurya, who is a prominent actor from Malayalam movie industry recently added a brand new Mahindra Thar to his garage. Video of the actor taking delivery of his Thar along with his family has already surfaced online.

The video has been uploaded by lifein4×4 on their YouTube channel. In this video, the actor can be seen taking the delivery of his new SUV. The actor is seen with his wife, son and daughter in the video. After the car was unveiled, the actor drives the SUV out of the Mahindra dealership. Mahindra Thar is way more advanced that before. It is currently one of the most affordable 4×4 SUV in the market. It is based on the same platform as the new Scorpio N. When compared to the older Mahindra Thar, the car gets several new features.

It also offers more space on the inside too. Mahindra now offers a three roof options from factory. There is a soft top, soft convertible and a hard top. Depending on the variant you opt, customer can choose between these roof options. The car comes with features like multi-function steering wheel, cruise control, touchscreen infotainment system that supports Apple CarPlay and Android Auto, roof mounted speakers that are drizzle resistant, completely washable floor and so on. The SUV became so popular that even now, it has a long waiting period. 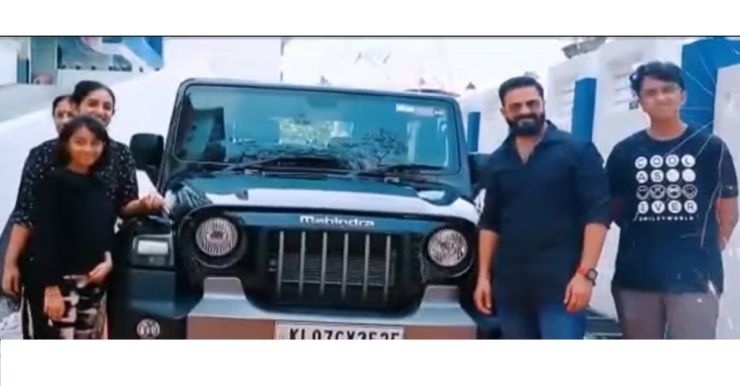 There are several modification options available for Mahindra Thar in the market. The Thar Jayasurya bought does not have any modifications. It is not clear whether the actor bought petrol or diesel SUV. Mahindra Thar petrol is powered by a 2.0 litre mStallion turbocharged engine. The engine generates 150 Bhp and 320 Nm of peak torque. The diesel engine used in this SUV is 2.2 litre turbocharged unit which generates 130 Bhp and 320 Nm peak torque. Both petrol and diesel engine options are available with manual and automatic transmission.

Jayasurya is not the only actor who has bought a Mahindra Thar. Actor Prakash Raj, Malayalam actress Anu Sithara, television Eijaz Khan also have Mahindra Thar in their garage. Other than Mahindra Thar Jayasurya also owns cars like Mercedes-Benz B-Class, Jaguar XF, Mini Cooper, Lexus ES300H, Mercedes-Benz GLC as well. Mahindra is currently working on a more practical version of Mahindra Thar. The manufacturer had announced that they’ll bringing a 5-door version of Thar in the market and a test mule of the same was recently spotted testing in India. Mahindra Thar 5-door is expected to be launched in the market next year and the SUV is likely to be powered by the same set of engines as the 3-door version. It might be offered in a different state of tune like other Mahindra SUVs that are available on sale.

Mahindra launched the current generation Thar in 2020. Ever since its launch, Thar became a popular choice among SUV lovers. It is a capable off-road SUV and there are videos available online that prove the same. Many Indian celebrities have also shown interest in this vehicle and some of them even bought it. Jayasurya, who…