Maruti Suzuki just launched the all-new, 2nd generation Brezza last week, and the sub-4 meter compact SUV has already clocked over 60,000 bookings within a week of launch. Maruti Suzuki is sitting on a backlog of 45,000 bookings for the old Brezza, which means that the deliveries of the all-new Brezza could happen only during the festive season of 2022 – 3 months from now. Meanwhile, here’s a speculative render showing what an all-black edition of the new Brezza would look like.

As the render indicates, nearly every external part of the all-new Brezza – save for the badge – has been blacked out. The all-black treatment does make the new Brezza look quite butch, and this is a route that a lot of after-market modifiers may want to take once the SUV begins reaching actual customers. In the real world, a look like this can be pulled off with either a paint job or a wrap. In both cases, endorsement on the Registration Certificate (RC) is required, and this would entail a visit to the local Regional Transport Office (RTO).

The all-new Brezza is dimensionally similar to the outgoing model save for its height – where it’s 45 mm taller. The additional height gives the new Brezza great street presence, and the SUV looks larger than most sub-4 meter compact SUVs sold in India. As has been the case with the outgoing model, Maruti Suzuki has opted for a petrol-only variant line-up for the new Brezza. The 1.5 liter-4 cylinder K-Series petrol engine now puts out 103 PS-135 Nm, marginally lower than what the older model’s engine (104 PS-138 Nm) made. 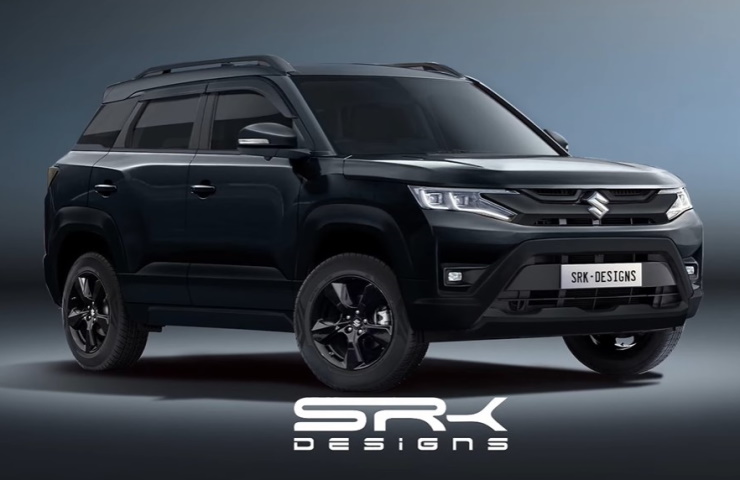 The new engine gets twin injectors for each cylinder, a step up from the single injector/cylinder on the previous motor. Tuned mainly for great fuel efficiency, the new 1.5 liter K15C petrol motor delivers 17 Kmpl in the manual trim, and 18.7 Kmpl in the automatic trim. Some of this fuel efficiency may be attributed to the mild hybrid system that the K15C petrol motor comes with. The mild hybrid system assists the engine during acceleration, maximizing fuel efficiency and cutting down on tail pipe emissions.

Ex-showroom prices of the all-new Brezza start from Rs. 7.99 lakh, going all the way up to Rs. 13.96 lakh. This makes the new Brezza one of the priciest offerings in its class, and much of this premium pricing may be attributed to the fact that the new SUV doesn’t get excise duty benefits. This is because of the fact that the SUV’s engine displaces 1.5 liters, well over the 1.2 liter limit for lower excise duty. For the steep price though, buyers get a slew of new features on the all-new Brezza. From an electric sunroof and 5.5-inch head-up display (HUD) to wireless phone charging and 360-degree camera view system, the all-new Brezza is a big step-up from the outgoing model.

Maruti Suzuki just launched the all-new, 2nd generation Brezza last week, and the sub-4 meter compact SUV has already clocked over 60,000 bookings within a week of launch. Maruti Suzuki is sitting on a backlog of 45,000 bookings for the old Brezza, which means that the deliveries of the all-new Brezza could happen only during…