India’s largest car maker – Maruti Suzuki has introduced the all-new Brezza in India priced at Rs 7.99 lakh, ex-showroom. Maruti Suzuki started accepting bookings for the all-new sub-4m compact SUV at a payment of Rs 11,000. Maruti Suzuki has received more than 45,000 bookings in 8 days. The new model replaces the ageing Vitara Brezza, which remained one of the top-selling cars in the Indian market. The 2022 Maruti Suzuki Brezza is an all-new model based on a new platform and is also equipped with a new petrol engine, transmission and features. 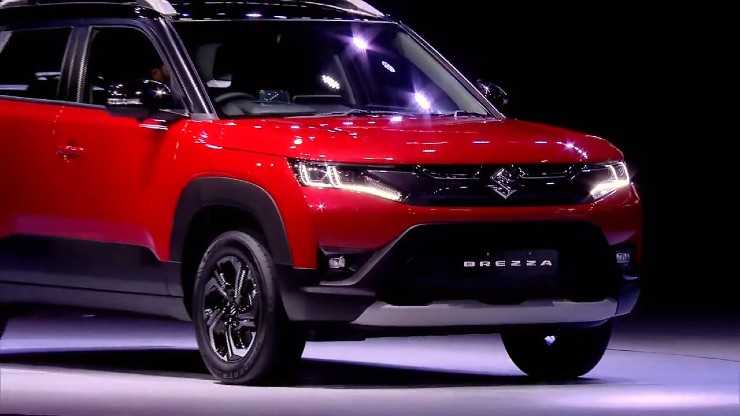 Since it is a full model change, the new 2022 Brezza looks completely new. The front-end gets a new design language that looks much sleeker than before. The grille is flanked by new all-LED sleek headlamp units. The new Brezza also gets new dual-LED daytime running lamps that add a unique identity to the car.

The bumper design is also new and gets a more robust design with heavy cladding. Maruti Suzuki has also added a new silver faux skid plate and new foglamps. The Brezza looks very new from the side as well. Maruti Suzuki has added new dual-tone alloy wheels and roof rails. The rear of the all-new 2022 Maruti Suzuki Brezza also looks sharper than before. The taillamps are new and get a sleek design. Also, the bumper design is much more robust than the front bumper while there is Brezza lettering across the tailgate of the new SUV.

The all-new Maruti Suzuki Brezza also gets a new cabin and a slew of all-new features. The dashboard layout is new and gets a layered design. Maruti Suzuki has also added a new 9.0-inch infotainment screen and the aircon vents are located just below the new screen.

The steering wheel is flat-bottom and gets various controls. Maruti Suzuki has also added rear aircon vents, which were missing from the vehicle for a long time.

The feature list becomes much longer than before. One of the most highlighted feature addition to the new Brezza is the electric sunroof. 2022 Brezza becomes the first car to get a sunroof from the brand. Also, Maruti Suzuki has added 5.5-inch head-up display (HUD), wireless phone charging and a new 360-degree camera view system.

The infotainment screen also gets Android Auto and Apple CarPlay connectivity options. There are connectivity features as well including remote SmartPlay systems that allow multiple functions in the car to be controlled from a smartphone.

The new 2022 Maruti Suzuki Brezza also gets a big change under the hood. The vehicle gets a 1.5-litre K-Series DualJet engine. It is the same engine that powers the new XL6. The new Brezza produces a maximum power of 103 PS of maximum power and 135 Nm of peak torque. Maruti Suzuki also offers a mild-hybrid system. There is a five-speed manual transmission and a new 6-speed torque converter with paddle shifters – same as the XL6.