Brngaluru has been experiencing heavy rains for the last couple of days. Overnight rains have completely flooded many areas in the Bengaluru city and there are several videos and images of vehicles and people stranded on flooded roads. People have vacated from many areas due to flood. The heavy rains have completely disrupted the lives of people. Many companies have asked their employees to work from home as many roads are flooded. Schools and colleges remained shut. A video has now surfaced on social media from Bangalore where people are seen pulling a bus out of a waterlogged road.

In Bangalore, instead of the bus getting you to office, you have to get the bus to office. #bangalorerain pic.twitter.com/bAnKlHl89O

As mentioned above, overnight rains have brought Bangalore city to its knees and cars, bikes and other vehicles are stuck at different parts of the city. In this video, poeple are seen pulling a Bengaluru Metropolitan Transport Corporation (BMTC) bus out from a road which is completely submerged in water. The video was posted by a Twitter user with a caption that said, “In Bangalore, instead of the bus getting you to office, you have to get the bus to office. #bangalorerain.”

The bus seen here in the video looks like a low floor model and the bus got stuck in the fooded road. It is not clear whether the driver drove the bus into the waterlogged road or was it parked at the spot overnight. Poeple who are probably local residents can be seen helping the bus driver and conductor to get the bus out. They have tied a thick piece of rope to the front of the bus and people are pulling the bus out of the waterlogged road. People can be seen putting all their energy to just get the bus out and they do it successfully. They pull the bus out from the water and after that driver drives the bus away.

Heavy rains have affected the lives of people badly. It has led to losses that are worth hundreds of crores. Speaking to ANI, Karnataka Chief Minister Basavaraj Bommai said, “We’ll call the IT companies and speak with them related to issues they’re facing (due to waterlogging). We’ll discuss the compensation and other related damages caused due to rain.” The heavy rains in Karnataka is expected to continue till September 9, especially in Bengaluru. Yellow alert has been issued to Kodagu, Shivamogga, Uttara Kannada, Dakshina Kannada, Udupi and Chikkamagaluru districts. 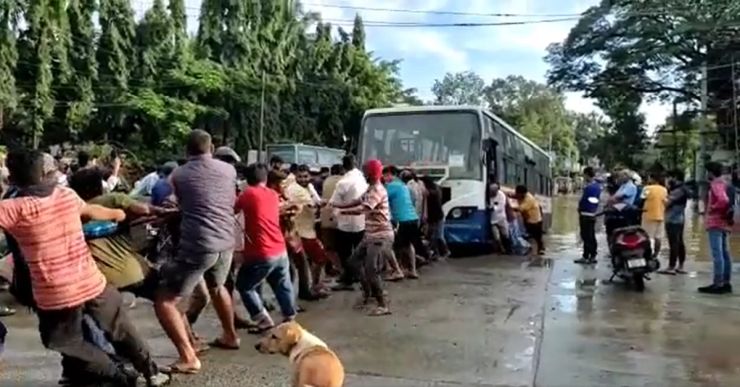 If you are from such an area where heavy rains lead to flooded roads. There are some things you should keep in mind. If you have a car or any other vehicle, do not drive it out until and unless it is unavoidable. If you see that the road ahead of you is flooded, try to take a deviation. If there is no other way but to drive through water, keeps the revs high and drive carefully as there are chances that the road under water might be broken. If your vehicle gets stalled, never try to start it again. If the level of water is more, there are chances that the ECU is your car may get damaged. Water might even enter the engine through the air intake and if that happens, your car would get hydro locked and you would be left with no other way but to tow your car to a service centre and get the water out, which is a time consuming and expensive process.