Cars and SUVs from Tata Motors are popular among buyers for its build quality. They are currently one of the leading car manufacturers in India. Tata has a variety of models in their line up including SUVs. We have come across several incidents that have proven how sturdy cars built by Tata Motors actually are. There are many customers who have escaped from serious accidents only because of Tata’s build quality. Here we have one such incident where an actor survived a Tata Nexon crash and he was so impressed that he bought a Tata Harrier.

The video has been uploaded by Nikhil Rana on his YouTube channel. In this video, the vlogger talks about how the actor decided to buy a Tata Harrier after he escaped from an accident in his Nexon. Vishak, who has acted in many Malayalam short films was returning after a shoot in Idukki district of Kerala. This is a hilly region and the accident happened few months ago. Vishak was going to Idukki after wrapping up a shoot in his Tata Nexon. His friends were also with him in the car. Idukki was getting heavy rains and the government had asked people to be on alert.

The roads were very wet due to rains and in one of the sections, the driver lost control over the car after he tried to avoid a pothole. The car went away from the road and fell 20-30 feet down. The car fell in front of a house and the Nexon fell and landed flat on its nose. In the pictures from the site of accident, it can be seen that the Nexon was very close to the house. Luckily, the actor and his friends and the driver all managed to escape the accident with some injuries. 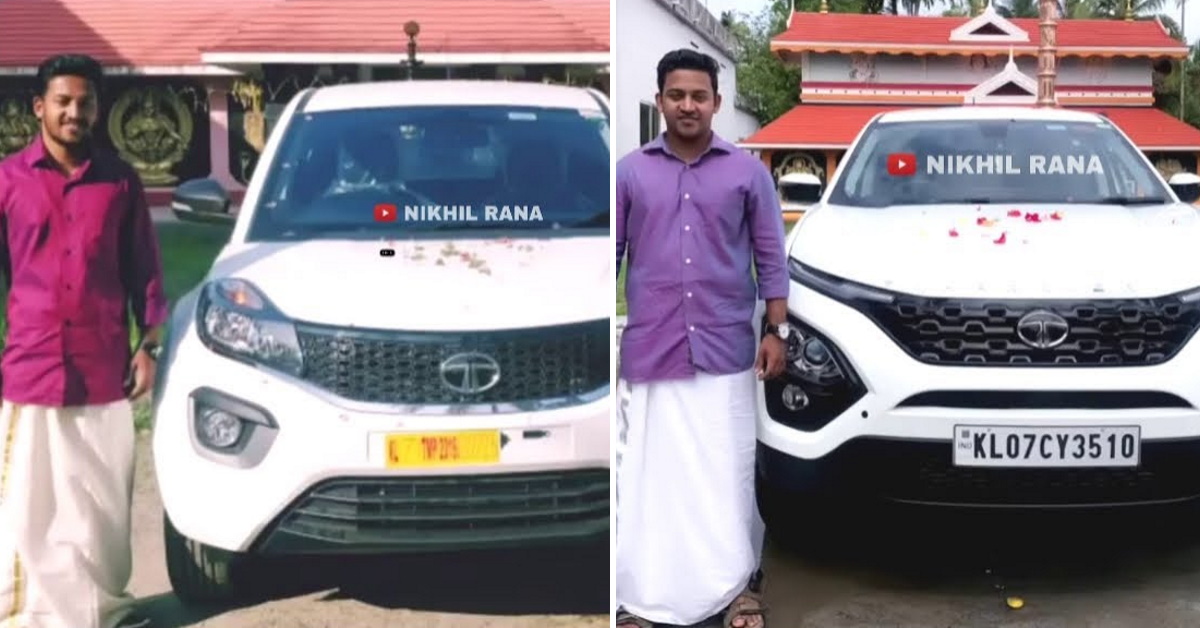 The Tata Nexon was completely damaged and it was clear that the car had completely absorbed the impact. Front end of the car was completely damaged and it looks like the vehicle had gone for total loss. Luckily, the car did not fall over the house, then things might have got worse. Vishak was very impressed with the build quality of the Tata Nexon. He was so impressed that after recovering from the injuries he decided to buy another Tata product. This time, he did not go for Nexon, he went ahead and bought a Tata Harrier SUV. Vishak who owned the Nexon only shared the information through his social media profile.

Tata Nexon is one of the safest compact SUV in its segment. It had scored 5 star rating in Global NCAP crash tests. This is not the first time, we are hearing about a Tata car owner buying another Tata car because he was impressed with build quality. Unlike Nexon, Harrier has not gone through Global NCAP crash test but, we guess that it is a well built product like other Tatas. Recently, Manipuri actress Soma Laishram who was travelling in a Tata Punch was also involved in an accident. The actress swerved the car sharply to avoid hitting a rider who came out on the road suddenly. Tata Punch fell off from the road and toppled. The singer escaped the accident without any major injuries.

Cars and SUVs from Tata Motors are popular among buyers for its build quality. They are currently one of the leading car manufacturers in India. Tata has a variety of models in their line up including SUVs. We have come across several incidents that have proven how sturdy cars built by Tata Motors actually are.…