Car dragged by a container truck for 2 km on highway

With rise in number of vehicles on our roads, accidents on our roads have also increased. Most of the time, these incidents happen due to negligent or reckless driving. In order to keep a eye on such violations, cops have now started relying of technology and have installed CCTV cameras on most of our roads and highways. In the past, videos of several accidents have gone viral on the internet and these videos have helped cops in tracking down the offender. One such video of an accident has now gone viral on the internet. In this video, a truck is seen dragging a car on a highway for almost 2 km.

The video has been uploaded by VideoTape on their YouTube channel. The video has been recorded in a CCTV that has been installed outside a restaurant on the highway. According to various reports, the truck hit the car on Pune-Ahmednagar Highway near Shikharpur. After the truck hit the car, the truck dragged the car for about 2 km. There were 4 passengers in the car and luckily all of them escaped without any major injuries. The truck is said to have hit the car from the behind and after it hit, the car turned and the side of the car hit the front of the truck. It was like a T-bone collision and the truck driver dragged the car with it for almost 2 km.

In this video, people who were standing outside the restaurant were shocked to see a truck dragging a car. It is not clear why the truck driver did not stop after it hit the car. The car was dragged for almost 2 km. There have been incidents in the past, where truck drivers have fallen asleep and that has lead to accidents. That possibility cannot be overlooked in this case. There is even a possibility that this was not an accident and intentional. No information related to the truck driver is currently available. 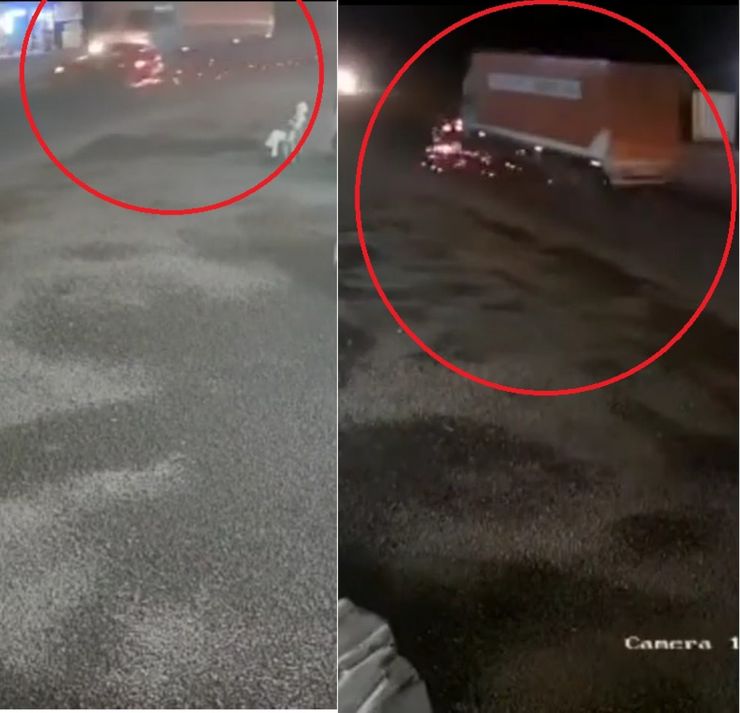 Driving on highways at night can be risky. The risk factor increases even more if there are lot of trucks on the road. You have to always maintain a safe distance from these trucks as there is no way of knowing what there next move is going to be. If you are planning to overtake a heavy vehicle, ensure that the truck driver can see your vehicle. Trucks and other heavy vehicles often have large blind spots and even that leads to accident at times. It is not known, whether the car driver was trying to overtake the truck from the left lane when the accident happened. While overtaking always use dipper lights or pass lights at night so that, the truck driver knows about your vehicle. Do not overtake instantly after using the pass light. Check if the road in front of you is clear and then start overtaking. As these trucks have large blind spots, it is the responsibility of the car driver to ensure that they overtake safely and staying out of the blind spot.

With rise in number of vehicles on our roads, accidents on our roads have also increased. Most of the time, these incidents happen due to negligent or reckless driving. In order to keep a eye on such violations, cops have now started relying of technology and have installed CCTV cameras on most of our roads…