Performing stunts on public roads is illegal and in the past, there have been several instances where police from different parts of our country has taken action against the violators. Latest reports are from Tamil Nadu’s Chennai, where a group of bikers have been arrested for allegedly performing stunts on public road. The bikers were performing stunts in front of the headquarters of Dravida Munnetra Kazhagam or DMK, which is the ruling party in Tamil Nadu. According to the reports, the incident happened in Chennai on Thursday night.

The video has been shared by Manorama News on their YouTube channel. The reporter mentions that bikers were doing stunts on road to increase the number of followers on social media profile like Instagram. The group had the whole thing planned out and chose Thursday night for the stunts. The roads were comparatively empty due to festival holiday and this gave them perfect window to do stunts. According to the video, the bikers had asked their friends to record videos from different part of the road.

The video shows a rider doing wheelie on a Yamaha R15 motorcycle. What is even more disturbing is the fact that the rider is not wearing any type of safety gear. Not even a helmet. There are other cars and bikes on the road. In some other location, a group of bikers on KTM Duke and Yamaha MT-15 can be doing similar stunt on the road. These videos were then circulated on social media to get popular and increase the number of followers. Chennai Police came across these stunt videos and after analysing the video, cops started tracking down the riders by checking the registration number of the bikes. 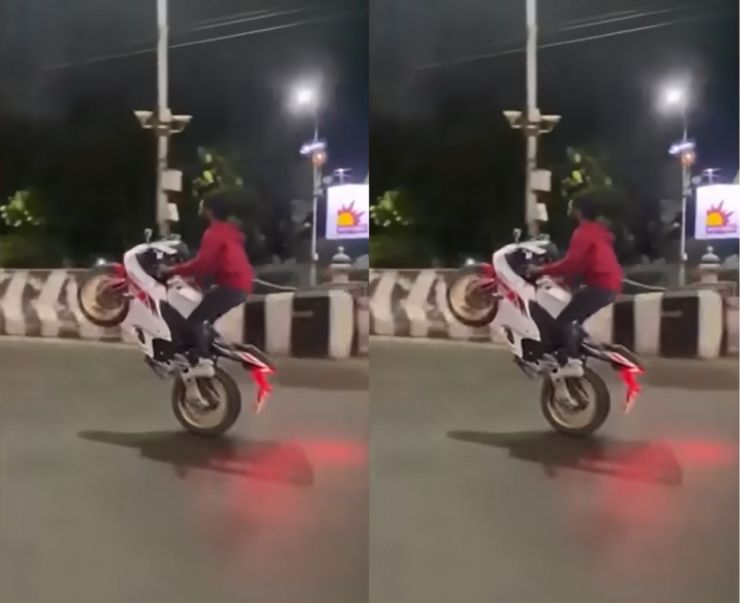 Based on the CCTV video and the social media, police officers from Pondy Bazaar traffic investigation wing arrested two college students Harris and Shaffan. Both of them hail from Ambur. A day after the cops arrested college students, they arrested three more bikers – Imran, Malik and Mukesh. All these bikers are part of a group and the cops have already formed a special team and has left for Hyderabad to nab the leader who is absconding. He is being identified as Binos.

This is not the first time, cops have relied on CCTV footages and social media to trace down the violators. In the past Kerala MVD has done this several times and has issued challan to such riders. In some of the cases, they have even suspended the driving license. In Uttar Pradesh, police has taked action against riders who were spotted doing stunts on public roads after the videos went viral on internet. The report does not share what charges have been put on the bikers and what is the condition of the bikes. Are the cops going to simply issue a challan on the bikers or will they ask authorities to suspend the driving license. Public road is not the place wher you perform stunt. By doing such activities, the bikers are putting there life and lives of other road users at risk. If you want to perform stunts and do races, it is always a good idea to wear safety gear and opt for a location like a race track or a private property where there are no other vehicles.