French manufacturer Citroen has announced the price of its first made-in-India car – the Citroen C3 in India. The price starts at Rs 5.7 lakh for the base variant while the top-end, fully-loaded version costs Rs 8.05 lakh. Only the top-end variant is available with the 1.2-litre turbocharged petrol engine while all the other variants will offer the naturally-aspirated engine. 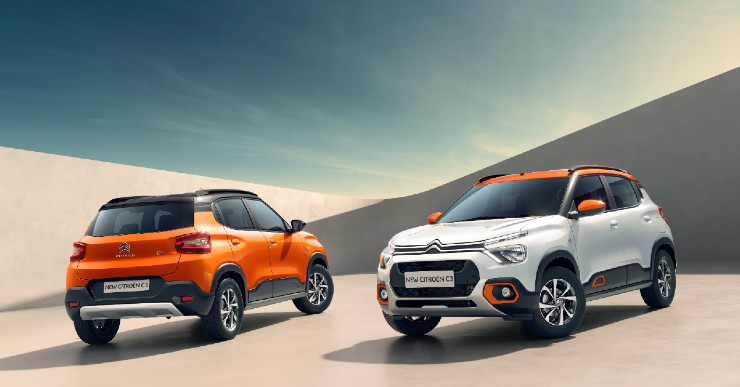 Citroen announced that this is an introductory price and will be revised at a later date. The new model is available in 19 cities including metropolitan cities like New Delhi, Mumbai, Chennai, and Kolkata. However, the car will be available in over 90 cities through the online portal of the brand.

The manufacturer has also announced that the new C3 will be available with a warranty of two years or 40,000 km and a warranty on the spare parts and accessories for 12 months or 10,000 km.

“The India launch of the New Citroën C3 is a very proud moment for all of us at Stellantis. With this launch, Citroën enters the mainstream B-hatch segment in India and we are confident the New C3’s Customised Comfort USP will make it attractive and unique for consumers. This is our first model from the C-Cubed family of vehicles that are designed and engineered in India, for Indians. With over 90% localised parts in the New C3, we are leveraging our strong supplier base, our R&D Center in Chennai, the Vehicle Assembly Plant at Thiruvallur and the Powertrain Plant at Hosur in the state of Tamil Nadu.”

Based on the Common Modular Platform (CMP), the Citroen C3 claims a 90 per cent localization level in India. The Citroen C3 gets unique design highlights like dual V-shaped daytime running LEDs, which merge with chrome accents across the front grille. The split headlamps on offer are simple halogen units. The other design elements of the Citroen C3 include contrast surrounds and cladding around the fog lamps, 15-inch diamond-cut alloy wheels and wraparound LED tail lamps.

The cabin of the Citroen C3 looks basic and minimalist with a tilt-adjustable steering wheel with audio and Bluetooth controls, a fully-digital instrument console and a 10-inch touchscreen infotainment system with wireless Apple Carplay and Android Auto.

To keep costs in check, the C3 misses out on modern essentials like automatic climate control, push start-stop button, rear wiper and electrical adjustments for the outside rearview mirrors. It gets basic safety essentials like dual front airbags, ABS with EBD and reversing parking sensors. Citroen is claiming class-leading shoulder room for the C3, which along with segment-leading wheelbase, should translate into a spacious cabin for three adults at the rear.

The new Citroen C3 will be sold with two 1.2-litre three-cylinder petrol engine options. First is the naturally-aspirated 82 PS version of this engine, which will be offered with a 5-speed manual gearbox. Then there is a turbocharged 110 PS version of this engine, which is paired to a 6-speed manual transmission. No automatic transmission-equipped variants will be offered at the time of its launch, though they might join at a later stage.

French manufacturer Citroen has announced the price of its first made-in-India car – the Citroen C3 in India. The price starts at Rs 5.7 lakh for the base variant while the top-end, fully-loaded version costs Rs 8.05 lakh. Only the top-end variant is available with the 1.2-litre turbocharged petrol engine while all the other variants…