Many parts of India is currently experiencing heavy rainfall and floods. One has to be extremely careful while driving out in such conditions. Recently, Kerala traffic police filed a case against a private bus driver in Kerala after they came across a video of him driving the bus over a flooded bridge or causeway. The video of the driver taking the bus through the flooded causeway had gone viral online.

The video has been shared by Manorama News on their YouTube channel. In this video report, it is clearly visible that the bridge or the causeway is completely submerged underwater. Like many other parts of India. Kerala has also been receiving heavy rainfall and Northern part of Kerala is experiencing more rain. Water levels in most of the rivers have risen and the flow has also increased. The incident happened in Mannarkkad region of Palakkad district in Kerala. The driver can be seen driving the bus through the flooded causeway.

It looks like someone who was standing on the other side of the bridge had recorded the video when saw the bus coming through the water. Kerala traffic police came across the video and filed a case against the driver. A case has been registered against the driver for dangerously driving the bus through a causeway fully submerged in water. It is not clear, whether there were passengers inside the bus when this incident happened. The video does not show any passenger. 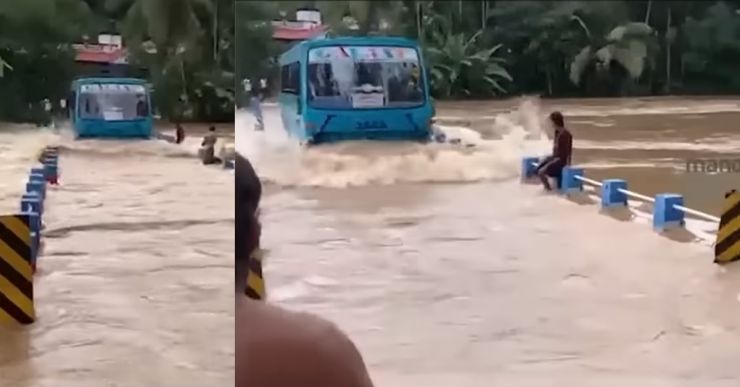 After the incident, there have been mixed response from the customer. Some of them support the cops for taking action against the driver and the others are applauding the driver and call it a brave move. Even there are people who have commented against the Public Works Department for not constructing a new bridge in the area as this happens every year.

Driving through waterlogged roads or bridges is always dangerous. In this case, it looks like the driver was familiar with the road and that is why attempted to do it. This does not mean, the bus driver did the right thing. Anything could have gone wrong while he was crossing the bridge. The flow of water has also increased and at times like these, the structural integrity of the bridge gets affected. As the bridge is submerged under water, no one actually knows if any part of the bridge is broken, cracked or damaged.

If the bus gets stuck or stalled while crossing the bridge, that would have also made things bad. After the incident, authorities have closed the causeway till the water levels are under control. They would also inspect the bridge for any possible damages before opening it for public. This is not the first time, something like this has been reported in Kerala. Last year, a video of a Kerala State Road Transport Corporation bus became viral after the driver drove it through a flooded road. The bus carrying passengers stopped after the engine got hydrolocked. The driver was identified by the authorities and was suspended.

Many parts of India is currently experiencing heavy rainfall and floods. One has to be extremely careful while driving out in such conditions. Recently, Kerala traffic police filed a case against a private bus driver in Kerala after they came across a video of him driving the bus over a flooded bridge or causeway. The…