Cops lift scooter from no parking zone with rider on it

In India, many cities face parking problems. Many don’t even look for a proper parking spot and park the car or two-wheeler on the road side. This creates a lot of problems for other road users as this creates congestion and traffic jams on the road. In order to avoid such situation, cops do rounds on such roads and make sure that they either issue challan or tow away the vehicle from the spot. There have been several cases where towing away the vehicle did not end well. At time, the cops even towed the vehicle away while the occupants were still in it. Here we have one such video from Nagpur where cops lifted a scooter from no-parking zone while the owner was sitting on it.

The video has been shared by humnagpurkar on their Instagram page. The Instagram video shows traffic police lifting a scooter from a no-parking zone with the rider or the owner sitting on it. According to the video, the incident happened in a no-parking zone near Anjuman Complex in Nagpur’s Sadar Bazaar area. A Honda Activa scooter can be seen lifted up in the air using a crane. The rider who is most likely to be the owner is seen sitting on the scooter. The rider came and sat on the scooter when he saw that the cops were going to lift his scooter.

Even after the rider decided to sit on the scooter, authorities continued to do their job. They did not stop and lifted the scooter up in the air. People gathered around to see the what exactly happened. Someone who was present at the spot recorded the video and uploaded it on internet. The video went viral and there was pressure on the traffic police department to take action against the crane contractor. This incident happened on July 19, 2022 and it is not clear whether any action has been taken against the contractor or not. Nagpur Municipal Corporation (NMC) and traffic police have not stopped and are continuing with the lifting of two-wheelers and cars from no-parking zones. 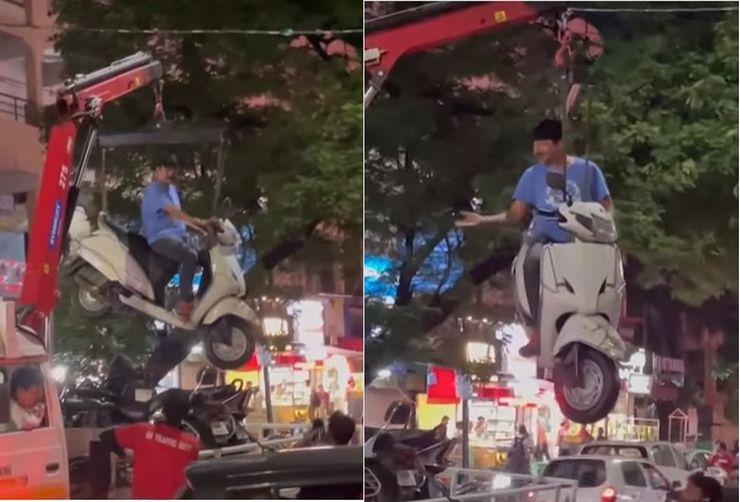 This is not the first time an incident like this has been reported in India. Earlier this year, a similar incident was reported from Uttar Pradesh. In this case, a Hyundai Santro car that was parked Janpath, Hazratganj in Lucknow was towed away when people where sitting inside the car. The driver of the car has stopped the car and went out t collect some item from a nearby shop.

At this time, a tow truck came to the spot and lifted the Santro when the occupants other than the driver were in it. Once the incident became viral, Lucknow authorities had no choice but to put an ban on the operations of all the cranes that were used to tow the vehicles from no-parking zones. Once, cops had towed a vehicle from no-parking zone in Mumbai with a women breast-feeding her child inside the car. As per the rule, a vehicle cannot be towed from a no-parking zone if there are occupants sitting inside the car.

In India, many cities face parking problems. Many don’t even look for a proper parking spot and park the car or two-wheeler on the road side. This creates a lot of problems for other road users as this creates congestion and traffic jams on the road. In order to avoid such situation, cops do rounds…