Cops in India are slowly catching up with social media and are utilising it to track criminals and traffic rules violations on the road. Recently cops arrested the owner of a Honda City sedan and a Bajaj Pulsar 160 for not having proper number plates installed on them. In place of the registration number, caste names were present on the seized vehicles. The incident happened in Yamunanagar. Images and videos of a car and a bike with ‘Prajapati’ written on the number plate instead of actual numbers had gone viral on social media. When the cops came across the video, they looked for both car and bike and seized them.

Not only did the cops seize the vehicles, they also arrested the owners of the vehicles when they were roaming around the city. Both Honda City and the Bajaj Pulsar motorcycle got a fine. The Honda City got a challan of Rs 40,500 and the motorcycle got a challan of Rs 28,500 imposed on it. The Station Incharge can be heard saying in the video that the officers have seized both the vehicles after they were spotted with illegal number plates. The registration number of both bike and car was not present. In place of numbers, the accused had placed a board with ‘Prajapati’ written on it in Hindi.

He added that action has been taken against both the vehicle owners under various Motor Vehicle Acts. He did not specify the exact sections under which they have been booked. We are all aware of the fact that it is illegal to modify a number plate or to use a fancy number plate. When it comes to a number plate, there are a set of instructions available for the font size, colour and other things that should be on the number plate. One cannot change the number plate on his or her vehicle as per his wish because every registration number in unique. 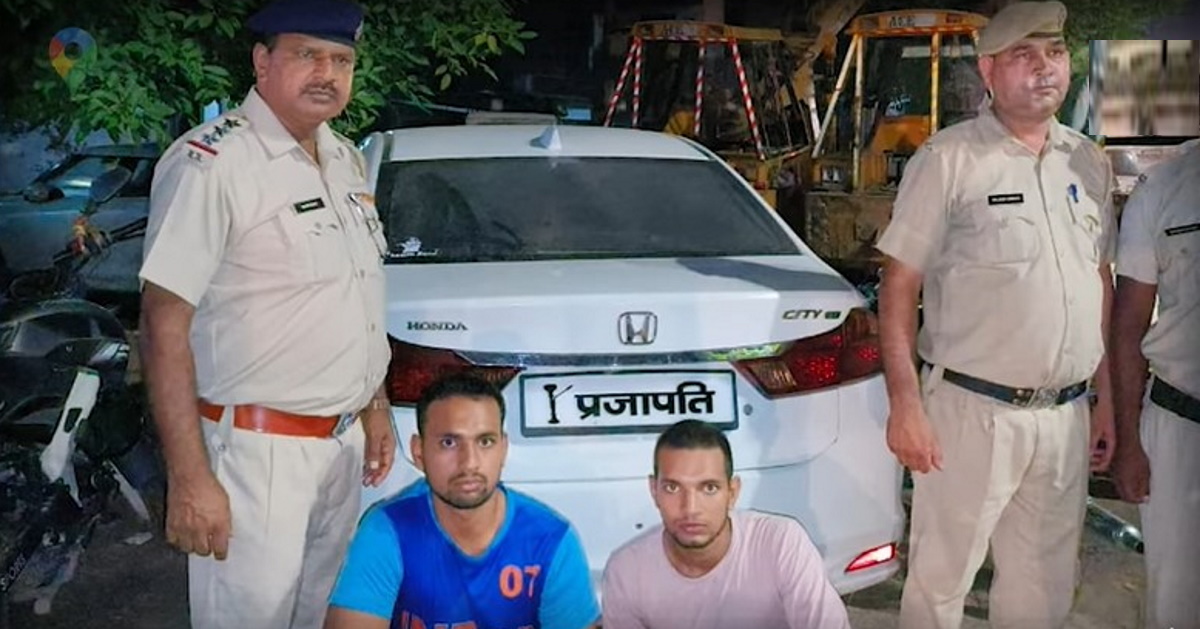 The number of your vehicle is linked to the chassis and engine number. This is done to help authorities track a vehicle in case of a theft or any other crime. In order to avoid any confusion related to the number plates, the government has introduced High-Security Registration Plate or HSRP. It comes with a chromium-based stamp, a unique laser code and a non-removable rivet lock so the number plate cannot be reused or replaced in case someone tries to steal it.

You will have to search for authorised dealerships who can install this number plate in your area. Few months ago, A young rider from Tamil Nadu had faced issues for putting ‘ Grandson of a MLA’ board on his bike instead of number plate. The law mentions it clearly that one must not put any kind of sticker on the number plate which would affect the readability of the numbers. This is not the first time something like this has happened in India. We have seen cops acting against vehicle owners with religious or caste stickers in the past but, after few months people tend to repeat these mistakes. Some states have also started taking action against vehicles that has not installed HSRP.

Cops in India are slowly catching up with social media and are utilising it to track criminals and traffic rules violations on the road. Recently cops arrested the owner of a Honda City sedan and a Bajaj Pulsar 160 for not having proper number plates installed on them. In place of the registration number, caste…