The details of the motorcycle have been showcased through a video on the YouTube channel ‘Vampvideo’. Named ‘Kalka’ after the goddess Kali, the chopper-style motorcycle customized by Kunwar Customs is based on a Royal Enfield Bullet 500. It has a low-slung stance, which immediately gives it a striking personality of a much-bigger motorcycle from, say, Harley Davidson. The front profile of this customized Bullet looks revamped, with the stock headlamp and its housing replaced with a rounded halogen headlamp.

Behind this small rounded headlamp, the motorcycle gets artificial springers, which will remind you of the retro motorcycles of Norton and BSA from the past. The motorcycle also gets a simple tubular front suspension and a tall 23-inch tyre at the front. The entire motorcycle gets a dual-tone finish of gloss black and matt black.

Another visual treat of this customized chopper-styled Bullet is its ape-style handlebar, which makes the rider’s cockpit of the motorcycle look wide. This upswept handlebar gets new-age switches from the previous-generation Royal Enfield Classic 350, including an engine kill switch. The bar end weights and handlebar levers have a brass finish. 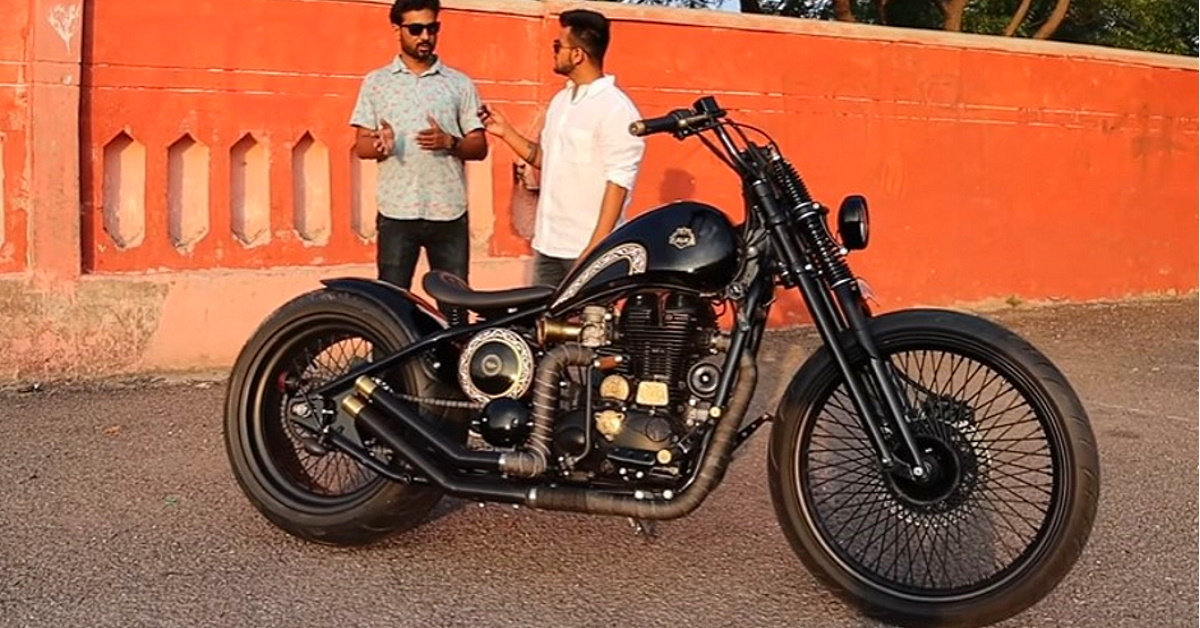 The custom-made teardrop-shaped fuel tank also looks beautiful with brass touches and handcrafted detailing on the side portions of the fuel tank and fuel tank lid. The motorcycle also gets handmade, forward-set foot pegs and levers, keeping the chopper theme as the centre highlight.

Moving to the other parts of the side profile, this customized chopper-styled Bullet also gets a low-positioned single seat in the middle of the motorcycle. There are several personalized brass touches on the black-themed engine, rounded side cowls and the custom-made, single-sided dual exhaust pipes. The rounded side body cowls of this motorcycle conceal its overall wiring.

The attention-grabbing element of the rear profile of this motorcycle is its wide 280mm section rear tyre, with a tiny, rounded and side-mounted tail lamp. It also has tiny turn indicators placed below the swingarm section on either side. It also gets after-market front and rear disc brakes and electric start, which were not available as standard in this motorcycle before the process of customization.

In the video, Rocky from Kunwar Customs said that the overall customization cost of this motorcycle is Rs 5 lakh (excluding the motorcycle), while the time taken for the whole customization process is 5-6 months.