The customer mentions that they already have a Skoda Kushaq 1.5 DSG and were looking for a sedan in the market. They finalised Volkswagen Virtus as it was meeting their needs. They did not opt for Skoda Slavia because they already have a Skoda at home and wanted slightly different car with good build quality and features. Volkswagen Virtus, Skoda Slavia, Skoda Kushaq and Volkswagen Taigun are all based on the same platform. The platform was specifically designed for India. The customer really liked the interior of the Virtus when compared to Slavia. He said, although both Slavia and Virtus share several components, the Virtus looks a lot more premium on the inside. 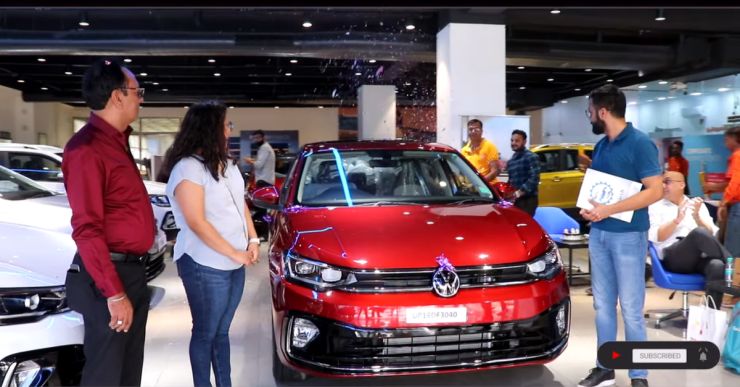 The customer was using a Hyundai Creta earlier and was not interested in going for Verna because he was concerned about the build quality. He did not want a Honda City as he had used one in the past. He was only looking for petrol options and that is how he finalised Virtus. The owner went for the 1.0 TSI Topline automatic variant because he already has the 1.5 DSG Kushaq at home and wanted the torque converter automatic version this time. He mentions that he took the car out for a drive before buying it and he could only feel a minor difference in terms of performance. Everything else remains the same.

The Topline is the top-end variant of the Dynamic variant of the Volkswagen Virtus which is offered with 1.0 litre turbocharged petrol engine. This engine has a claimed fuel economy of 19 kmpl. The owner can be heard saying in the video that he would like to see how efficient the car would be in real world conditions. In comparison to the DSG Kushaq that he already has, the Virtus is expected to return a better fuel efficiency. The owner mentioned that he paid around Rs 18 lakh on-road for the sedan with insurance. The Virtus 1.0 TSI is available with both manual and automatic transmission option. The 1.5 TSI on the other hand gets a DSG transmission only. The 1.0 litre TSI generates 115 PS and 178 Nm of peak torque. The 1.5 litre TSI generates 150 Ps and 250 Nm of peak torque.