In a rather shocking turn of events, a young IT employee from Bengaluru, along with four of his friends, got arrested in Manipal for engaging in road rage and damaging two other vehicles. The IT employee, who has been identified as Suhas, and his four friends – Bharath, Naveen Kalyan, Nirmala and Kavana – have been arrested by Manipal Police for damaging two cars after engaging in a road rage incident, after they created ruckus at a local pub.

IT company emplyes- Suhas from Bngaluru who was drunk showed unruly behaviour to rage on road damaging two cars in #Manipal on Saturday late night. He had come to a pub and was sent out by bouncers for rude behaviour. So he resorted to this kind of rage on road@XpressBengaluru pic.twitter.com/n4utrCJsSW

According to a statement given by Manipal police, Suhas and his friends, all visited a pub, while they were in the town to attend a wedding. While they were in the pub, they started behaving inappropriately under the influence of alcohol and started demanding from DJ to play their favourite song. On being denied, they started creating a ruckus and were then confronted by the bouncers of the pub. 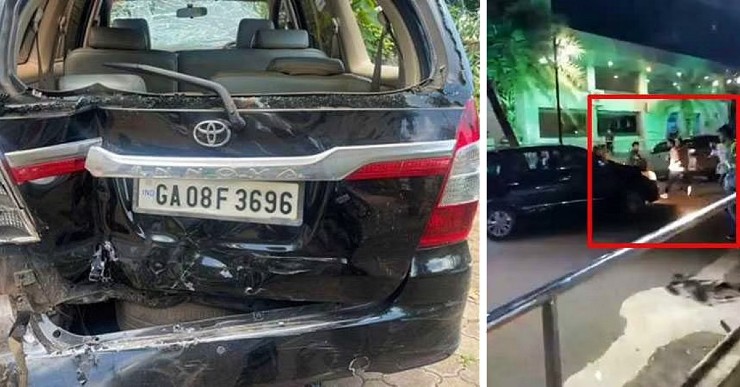 Suhas and his friends fled from the incident spot after damaging the cars. However, the people outside the pub recorded the entire incident on their mobile phones, which served as evidence. The visuals of the incident recorded also show people scampering at the venue to find a safe spot. One of the employees of the pub, Vikranth, got his leg injured in the accident when Suhas ran his Innova over his leg.

Suhas and his friends are in their 20s and belong to the town of Shivamogga, though all of them are working in the IT industry in Bengaluru. All five people got arrested and were sent for medical tests since all of them were allegedly under the influence of drugs. Suhas has been booked under the IPC sections 279 and 337, while the Toyota Innova involved in the road rage has been seized by the Manipal Police. The results of the medical tests are expected to come out on Monday.

Road rage is common in India

Every now and then we get to read news reports and see videos of road rage. While there is no rule against the road rage, it is best to leave the spot quietly before the situation develops.

Road rage is something that can strike anytime and can escalate real quick. It’s critical to have a cool head while driving/riding anywhere, more so on chaotic Indian roads. Here are some tips to ensure that you don’t get into a road rage incident.

Driving should be a relaxing experience. Try to stay as relaxed as possible. Switch on the music, and air conditioner to help you relax, breathe deep and take it easy. Just try to be in a good mood when on the road.

Stay within the speed limit, give signals at the appropriate times while changing lanes, use your rearview mirrors and give enough allowance for others’ mistakes or aggressive behaviour.

In a rather shocking turn of events, a young IT employee from Bengaluru, along with four of his friends, got arrested in Manipal for engaging in road rage and damaging two other vehicles. The IT employee, who has been identified as Suhas, and his four friends – Bharath, Naveen Kalyan, Nirmala and Kavana – have…