Carnet is a facility that many Indians living abroad especially in Dubai are utilising to the fullest. Carnet is a passport for goods which allows owner to import a vehicle or any other goods to India without paying import tax and duty. The cars are imported temporarily for a period of 6-12 months. Car culture in India has matured over the years and many people are utilising carnet facility to import exotic cars. In Kerala, there are many Dubai registered vehicles and one such vehicle that was probably imported recently was a Toyota Tundra pick up truck. Here we have a video, where the owner of this truck is actually doing a mud race in it.

The video has been uploaded by RDMedia on their YouTube channel. In this video, the vlogger is recording a mud race in his hometown. They chose an field which was suitable for such mud racing. The participants of the race were locals of the area and they came with 4×4 vehicles that they own. Initially it was an old tractor and a Mahindra jeep which were doing rounds in the field.

After some time, the Toyota Tundra comes to the venue where the mud race was happening. It is actually not a race but, more of an event where people were actually driving their SUVs in mud. Toyota Tundra came to the spot and the driver somehow managed to get the truck into the field. Toyota Tundra is unlike any other vehicle that we have on our road. It is huge and driving it through narrow village roads is a task. After the owner got the truck into the mud, he started driving it around. Intially, the driver or the owner of the truck was having some difficulties and was driving carefully. 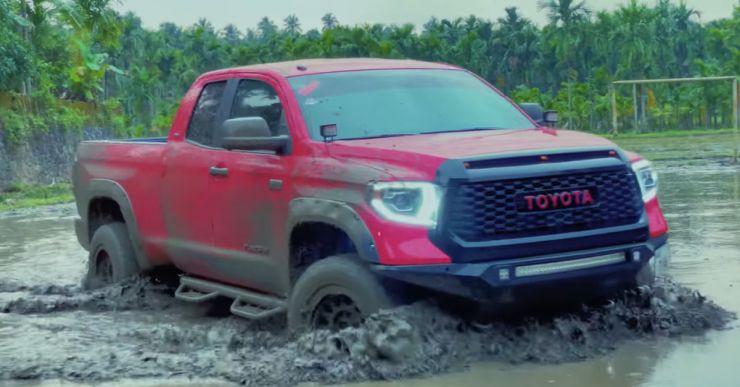 Once he got a hang of the surface and the way the truck was behaving in dirt, he started having fun. He was pushing the car to the limit and within minutes, the whole truck was covered with mud. The truck was equipped with off-road spec tyre and that helped it perform well. The driver did manage to get it stuck at couple of places but, it was nothing serious and the SUV pulled itself out. The loud exhaut note from the truck attracted a lot of audience and the road near the field was filled with people. It is not everyday that you see a Toyota Tundra in India and that too in such conditions.

The track through which the truck came down to the field was very narrow. The long wheelbase and electric poles on both sides of the entrace made it even more trickier. After driving the truck in the mud for hours, the car was pulled out from the field carefully using an electric winch. The Toyota Tundra seen here is powered by a 5.7 litre i-FORCE V8 engine that generates 381 Bhp and 544 Nm of peak torque. It is mated to a 6-speed automatic transmission and is a capable off-roader.

Carnet is a facility that many Indians living abroad especially in Dubai are utilising to the fullest. Carnet is a passport for goods which allows owner to import a vehicle or any other goods to India without paying import tax and duty. The cars are imported temporarily for a period of 6-12 months. Car culture…