Facelift vs pre-facelift modeels in a comparison video

Kia Seltos was first product from Korean car maker in Indian market. It became an instant hit in the market and is still one of the popular SUV in the segment. It competes with Hyundai Creta, Skoda Kushaq, Volkswagen Taigun in the segment. Seltos is sold in Indian and international markets. In other markets, Kia has already launched the facelift for Seltos and India is yet to receive it. Here we have a video where the facelift and pre-facelift version of Kia Seltos SUV is compared in a detailed manner.

The video has been uploaded by CarSceneKorea on their YouTube channel. South Korea is one of the first markets to get the facelift model of Seltos. In this video, YouTuber shows all the differences both the SUVs have while they are parked next to each other. The pre-facelift model seen here in the video is actually owned by the vlogger himself. He starts with the front grille of the SUV. The facelift version of the SUV comes with a Tiger Nose grille as the older model but, the grille on the new version is a lot more wider and looks muscular from the front. Vlogger mentions that he used to think that his car had a bold design but, the facelift looks even more bold than before.

The extended LED DRL is still retained but, the position of the lights have slightly changed. The headlamps are LED units and so are the turn indicators. The bumper looks the same as before except for the faux skid plate. It gets a minor revision and there are four LED lights in the fog lamp instead of 3 in the pre-facelift model. Coming to the side profile, the overall design of both the SUVs remain the same. The design of the alloy wheels are however different. The new Seltos comes with a 360 degree camera too and the same can be seen under the wing mirror.  The pre-facelift version gets diamond cut alloy wheels while the new version of the Seltos gets a gloss black and machine cut alloy wheel design. 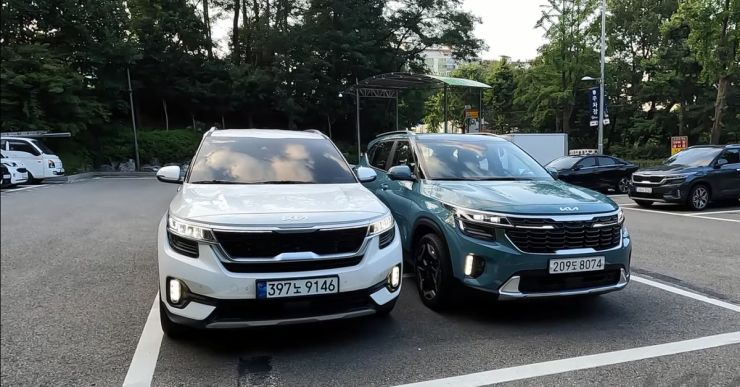 At the rear, the differences are much more evident, especially the tail lamp. The facelift version gets an all-LED tail lamp with a revised design. There is an LED bar running across the tailgate connecting the tail lights. This is giving the car a wider look than what it actually is. The Kia branding is on the LED panel on the tail gate. The bumper has been redesigned too. On the inside, the facelift Kia Seltos comes with a fully digital instrument cluster, large touchscreen infotainment system and a redesigned center console. The buttons for climate control and other features are repositioned and the gear lever has been replaced with a rotary knob. It continues to offer all the features that were available with the previous version and some more. It now offers an electric tail gate which was missing in the pre-facelift model. Kia also offers a 360 degree camera as mentioned above. Kia Seltos facelift definitely looks fresh on the outside and it is expected to be launched in India next year.

Kia Seltos was first product from Korean car maker in Indian market. It became an instant hit in the market and is still one of the popular SUV in the segment. It competes with Hyundai Creta, Skoda Kushaq, Volkswagen Taigun in the segment. Seltos is sold in Indian and international markets. In other markets, Kia…