Electric vehicles especially two-wheeler market has grown tremendously in the last couple of years. There are several new and existing electric scooter manufacturers available in India. Fire and other accidents in electric vehicles have also been reported from various parts of India. The latest news comes from Kerala’s Kozhikode district where an electric two-wheeler showroom caught fire. The fire destroyed almost 9 vehicles in the showroom.

The video has been shared by asianetnews on their YouTube channel. The video report shows how the fire completely destroyed the showroom. The incident happened in a Exxon Motors – Komaki electric two wheeler showroom located on Kozhikode-Wayanad road. The dealership is located in MN Tower in front of Fathvima Hospital. As per the report, the fire broke out from an electric scooter which was brought to the dealership for servicing. There were many other electric scooters and electric bikes parked in the service area when the accident happened.

One of the vehicle which was brought to the service station had issues with the battery. There were multiple scooters in the dealership that had come with an issue for the battery and the technicians were testing each of them individually. Battery on one of the scooters that was parked in the service area burst while the testing was going on and the there was smoke and fire immediately. The fire spread to the nearby vehicles that were parked. Within minutes, the dealership was filled with smoke and people passing by noticed it. 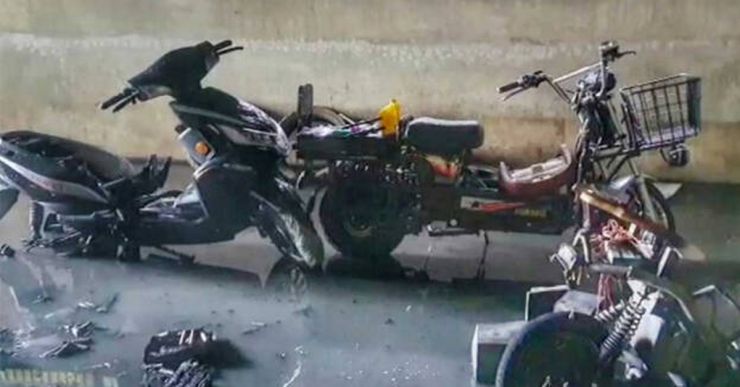 Locals only informed the Beach Fire Force and two units of fire brigade rushed to the spot and extinguished the fire in half n hour. Timely intervention by the authoritied averted a major accident. The report does not say if any employees or customers were injured in the accident. The fire had spread to other electric vehicles parked in the showroom and a total of 9 vehicles have been destroyed completely. There is an estimated loss of around Rs 17 lakh for the showroom. 5 vehicles that caught fire were brand new units. Other than the 9 scooters, 3 scooters were partially damaged in the fire.

Electric vehicles catching fire has become a common phenomenon in India. Because of the same reason, the Indian government had started an investigation to find the reason behind these EV fires. DRDO or Defence Research & Development Organisation reported that the issue is due to the battery design and EV modules. DRDO said that the bad design of the batteries in EV is causing the fire. Such defects occur when manufacturers use low-grade materials to reduce the production cost. Electric scooters from manufacturers like Ola, Okinawa, Ather, Pure EV have all caught fire in the past.

The central government is also working on making new guidelines for EV manufacturers to ensure that the vehicles meet and offer a similar quality. It is not just electric two-wheelers that have caught fire in India. a Tata Nexon has also caught fire in Maharashtra and the manufacturer had come forward and annouced that a detailed investigation has been ordered to know the exact reason for the fire.

Electric vehicles especially two-wheeler market has grown tremendously in the last couple of years. There are several new and existing electric scooter manufacturers available in India. Fire and other accidents in electric vehicles have also been reported from various parts of India. The latest news comes from Kerala’s Kozhikode district where an electric two-wheeler showroom…