The video has been uploaded by Arun Panwar on their YouTube channel. In this video, vlogger compares the exterior, interior and the engine specification of both the SUVs. He starts with the price first. He mentions that Force Gurkha with all the accessories seen on the SUV costs around 17 lakh. On the other hand Mahindra Thar is expensive than that. He mentions that Force offers LED headlamps, dotted ring like LED DRLs with Gurkha while the Thar comes with halogen headlamps from factory.

Force Gurkha looks huge in front of Mahindra Thar. It is tall and long when compared to Thar. However, the ground clearance on Force Gurkha is less than that of Thar. The turn indicators on Gurkha are placed on the fender like Mercedes-Benz G-Wagen. The turn indicators and LED DRLs on Mahindra Thar are placed on the fender. Both SUVs offer halogen fog lamps but, Gurkha gets cornering function with those lamps. Coming to the side profile, Gurkha gets dual-tone 16 inch alloy wheels and the Thar gets 18 inch grey coloured alloy wheels.

You would definitely need the foot board to get inside the Gurkha as it is taller. Gurkha gets snorkel from factory while Thar does not. The glass arear for the rear seat passenger is larger on Gurkha and the access to the second row seat in Gurkha is by opening the tailgate. This is not possible in Mahindra Thar. Force Gurkha offers more spacious cabin and it also has decent amount of headroom and leg room. In order to get to the second row seat in Mahindra Thar, one has to fold and slide the co-passenger seat and sit. 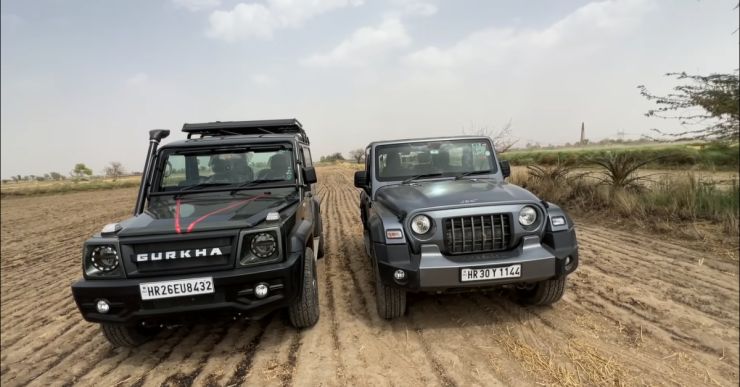 Force Gurkha however gets differential lockers for both front and rear. Thar gets mechanical locking differential for the rear only. Coming to the engine, Force Gurkha gets a massive 2.6 litre turbocharged diesel engine which comes with a manual gearbox as standard. There are no other engine options. Mahindra Thar on the other hand gets a 2.2 litre turbo diesel and a 2.0 litre turbo petrol engine. Both these engine options are available with manual and automatic transmission option. Gurkha generates 91 Bhp and 250 Nm of torque and Thar generates 130 Bhp and 320 Nm. Thar is more comfortable while driving on road.