BMW has a variety of products in Indian market. They also offer their luxury SUVs and when we speak about this particular brand, Master Blaster Sachin Tendulkar’s name is often associated. He is an auto enthusiasts and was also the brand ambassador for the brand in India. Naturally he had several BMWs in his garage including an X5 which was offered to him back in 2014. What is so special about the car? It is the X5 M50d luxury SUV and what makes it even more special is that there are no other M50d X5s in India. Here we have a quick video that shows the car inside out.

The video has been uploaded by The Drivers Hub on their YouTube channel. Sachin Tendulkar had sold this SUV long ago and it now belongs to a different owner. However, it is still an exclusive car in India as this is the only unit that BMW ever imported to India. The SUV looks like any other X5 on the outside. The SUV gets BMW’s signature kidney grille, projector headlamps, DRLs, headlamp washers and so on. As this is the M variant, the SUV gets a much more aggressive looking bumper and the design of the alloy wheels is also different.

The tyre size is different and they are slightly wider than the regular version. There are fender flares on this SUV which again are not seen in the regular version of the X5. The car looks the same in terms of design. It however gets bigger disc brakes and there are M badging on several panels. The SUV gets split LED tail lamps, sporty looking rear bumper with twin exhaust tips and an M badge from the factory. This is an extremely rare car and history of the car is what makes it even more special. The vlogger then talks about the engine specifications. As the name suggests, the X5 M50d is a diesel SUV. The SUV is powered by a 3.0 litre inline 6 cylinder, tri-turbo diesel engine. The engine generates a maximum of 376 Bhp and 740 Nm of peak torque. The engine is mated to an 8-speed automatic gearbox. 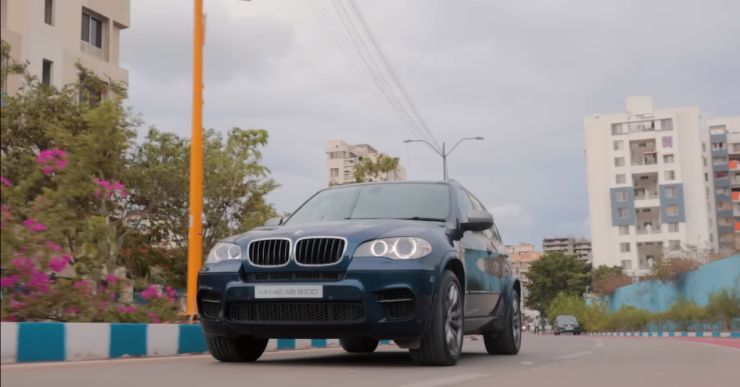 The vlogger is surprised by the way the owners of this SUV have maintained the car. The performance on this SUV is brilliant and as this is a diesel SUV, you don’t get a sporty exhaust note. However, he mentions that some noise from the 6 cylinder engine can be heard in the cabin. He was very excited to drive the car because, he was going to be sit on the seat where Sachin Tendulkar used to sit when he had the car with him. Vlogger also talks about the issues that the current owner has been facing. As this is the only car in India, maintaining becomes an issue at times. If any part has to be replaced, the minimum waiting period is at least 2 months. Other than this, the car has no mechanical problems and everything from exterior to interior looks like how it was when the car was bought.

BMW has a variety of products in Indian market. They also offer their luxury SUVs and when we speak about this particular brand, Master Blaster Sachin Tendulkar’s name is often associated. He is an auto enthusiasts and was also the brand ambassador for the brand in India. Naturally he had several BMWs in his garage…