Pick up trucks only became popular in India after the launch of Isuzu in the market. Before Isuzu we have lifestyle pick up trucks like Scorpio Getaway, Tata Xenon in the market and they were never as successful as Isuzu or the recently launched Toyota Hilux. Isuzu V-Cross became popular among buyers for its looks and the price. It is a huge vehicle and comes with lot of modification potential. There are several examples of modified Isuzu trucks from different parts of India and around the world. Here we have a video of a heavily modified V-Cross which gets modifications worth Rs 16 lakh.

The video has been uplaoded by GOKZ MOTOGRAPHY on their YouTube channel. In this video, the anchor talks about all the modifications that have been done to the Isuzu V-Cross. This is a 2020 model Isuzu D-Max V-Cross pick up truck. Starting with the front, the V-Cross gets a heavily modified front. The stock grille on this truck has been replaced with an aftermarket unit. All the chrome elements on the truck have either been removed or blacked out. The headlamps are now smoked and they now come with custom lights in them.

Also read: Mahindra XUV700 Getaway: What it could look like (Video)

As we come down, the stock bumper on this SUV have been replaced as well. It now comes with an aftermarket off-road bumper from Hamer brand. There are fog lamps integrated into the metal bumper and an electric winch is also added. The bonnet on this truck has been customised too. It now gets a Dodge Ram inspired bonnet with multiple hood scoops on it. A set of auxiliary lamps are also installed on the bonnet along with marker lamps in grille and the bonnet scoop. Coming to the side profile, the main attraction here are the new set of wheels. The truck sits on 17 inch aftermarket alloy wheels with chunky looking Rugged Terrain tyres. 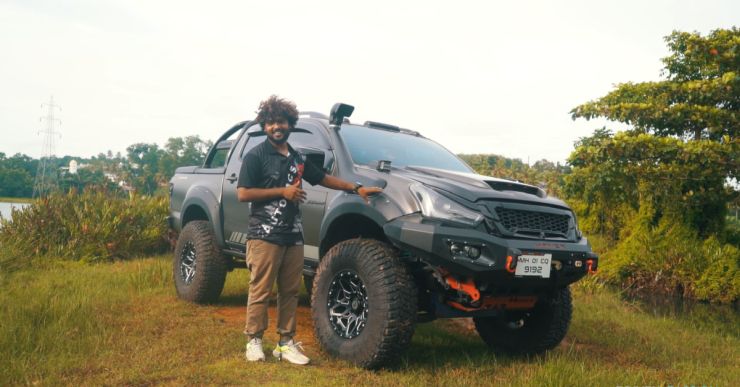 There is a retractable foot rests as the SUV is now a lot more taller than the stock version. It gets a 7 inch lift kit installed in it. The lower and upper arm on this Isuzu are custom made units and the suspension set up on the truck has been upgraded too. As we move to the rear, there is a roll bar installed on the truck. Along with that, it also gets a lid for the cargo bed to ensure that the luggage stays safe and dry all the time. Just like at the front, the rear bumper on this truck has been modified too. It gets an off-road bumper from the same brand and it comes with reverse lamps integrated into it. There is a ball type tow bar on the rear and the tail lamps have been replaced with aftermarket units.

With all these modifications in place, the weight of the truck has increased. In order to compensate that, the engine gets stage 1 remap for better performance. The exterior has been completely wrapped in a Neo Black shade. Along with the exteriors, interior of this truck has been customised as well. An all-black theme has been opted for  an all-black theme. The seats are wrapped in artifical leather upholstery. The truck looks imposing and is probably the most expensive Isuzu V-Cross in the country. It took around 4-5 months to complete the project as many of the components were imported from other countries. The approximate cost of this modification is around Rs 16 lakh.