Jeep Wrangler SUV gets stuck in mud: rescued by JCB

Jeep as a brand has been present in Indian market for almost half a decade. During this time, they introduced some of their popular models like Wrangler and Grand Cherokee as well. Jeep Compass which is a made in India product is still Jeep’s most popular and affordable vehicle in the Indian market. Jeep Wrangler started gaining some popularity among SUV enthusiasts after Jeep started manufacturing the same in India. It is a capable off-roader and we have seen several videos of Wrangler online which proves the same. Here we have a video that shows a Jeep Wrangler being recovered by a JCB backhoe loader after it got stuck in mud.

The video has been uploaded by Raftaar 7811 on their YouTube channel. We not sure how the Jeep Wrangler Rubicon actually got into this situation. When the video started, the car was already stuck in the mud. It looks like the road in the area was under construction. loose gravel can be seen on one side of the road. It looks like the driver wanted to test the capabilities of Jeep Wrangler and got it stuck in the mud that was lying next to the gravel. The mud was actually not sticky and was dry.

It looks like the excess mud under the gravel was scooped and was simply put on to the road side. The Jeep Wrangler completely got stuck in the loose soil or the mud. The soil was so soft that the SUV immediately got beached. The underbody of the SUV was touching the ground and the wheels were actually helpless in this case. Jeep Wrangler is a heavy SUV and that made things a bit more challenging. It feels like the driver or any other occupant in the car never thought that the car would get stuck. After several unsuccessful trials to get the Wrangler out, they asked a JCB driver to help them. 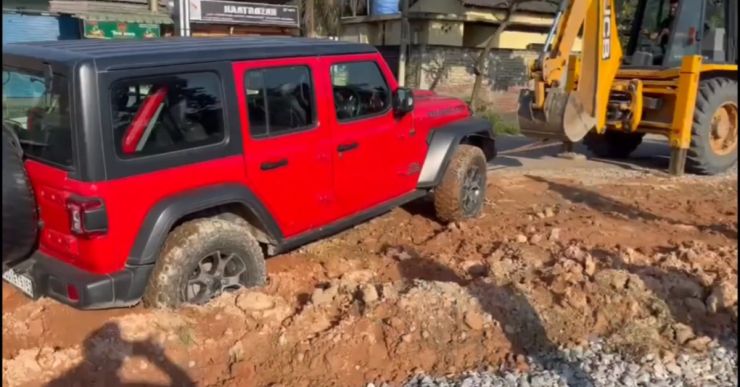 The backhoe loader was probably working at the site where the Rubicon actually got stuck. The driver ties a metal chain to the Wrangler and anchors itself on the road. The driver of the Jeep Wrangler gets into the car and starts driving the car forward. With the help from the JCB, the Wrangler came out of the mud without any damage. It was a very small patch and just next to it was a proper road.

It is quite clear that the owner’s intentions were not to go off-road with the SUV. He was just trying if the SUV could clear a small obstacle without any issues. As always, there are set of things that one must keep in mind while going off-road. One of them is to walk to the obstacle. The driver should have stopped and checked the surface before driving it into the mud. He could have avoided this situation if he came down and checked if the mud is loose or not himself. Next is always carry a recovery equipment at least a tow rope in the SUV and never go alone for such off-roading expeditions.

Jeep as a brand has been present in Indian market for almost half a decade. During this time, they introduced some of their popular models like Wrangler and Grand Cherokee as well. Jeep Compass which is a made in India product is still Jeep’s most popular and affordable vehicle in the Indian market. Jeep Wrangler…