Call it an unfortunate event, but even the most responsible superbike rider is often considered a nuisance creator by the traffic police. Usually, superbike riders are often stopped for multiple reasons, among which loud noise from the exhaust is the most common reason.

In a YouTube video uploaded by Magician Ad, we can see the presenter being stopped by a traffic policeman, and the reason behind it was that he was riding a big superbike, a Honda CBR650R. The traffic policeman stopped the biker and sat on his pillion seat without citing any reason, which is generally not permissible as per the traffic rules.

When the rider tried to confront the traffic policeman, he started dragging the bike to the nearest checkpoint, where a few other traffic policemen were deputed on duty to check the miscreants on the road. 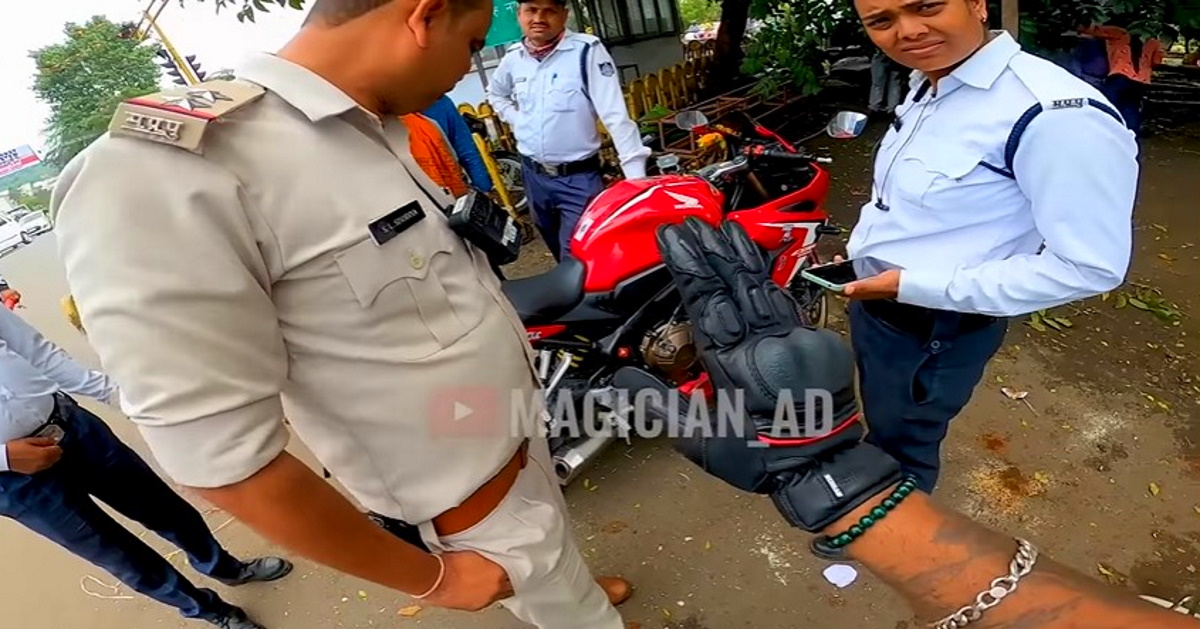 The bike rider tried to explain that the sound from his motorcycle’s exhaust was well-defined within the decibel limits. However, even after that, the traffic policemen turned a deaf ear to his pleas. The rider even requested the policemen to check the decibel reading of his bike’s exhaust note, but the policemen couldn’t do so as they were not having the device for the same.

The video progresses with a scene, in which the bike rider, who also happens to be a magician, tried to impress the policemen with a couple of magic tricks. Overjoyed after seeing the magic tricks, the policemen on duty became lenient and let the rider go without any further troubles or fines. The rider is eventually seen departing the spot with all his riding gears on.

In India, superbike owners are considered to be troublemakers, even after they ride with all the required protective gear like helmets, gloves and riding jackets and pants. Police even catch those riders deliberately, who ride with all their gears on, as they consider them stunt performers on the public roads.

While we appreciate the traffic policemen for their promptness, they should be aware of the fact that not all superbike riders or riders who wear riding gear while riding are miscreants on the road.

Many police departments also use decibel meters. It measures the level of sound in decibels. The device can be used to check the loudness of exhausts and aftermarket exhausts and the cops can issue on-spot challans depending on the reading coming from this device. Even in the stock exhaust, if you do changes to make the exhaust loud, his device can identify that easily. The same device can also be used to measure the loudness of a horn and aftermarket horns. Many use air horns or pressure horns, which are banned by law.

Call it an unfortunate event, but even the most responsible superbike rider is often considered a nuisance creator by the traffic police. Usually, superbike riders are often stopped for multiple reasons, among which loud noise from the exhaust is the most common reason. While there are bikers who are stopped for installing illegal loud exhausts,…