Mahindra Scorpio is one of those SUVs that has been present in the Indian market for almost 2 decades and still has not lost its popularity. The SUV is still doing good in terms of sales and recently, Mahindra decided to make some cosmetic changes to the SUV to give it a fresh look while it sells alongside the new Scorpio N. Scorpio is now known as Scorpio Classic and it comes with rugged looking overall design.

The SUV still has a large fan following – and the Scorpio N is of course pricier – which is probably one of the reasons why Mahindra has not discontinued the original Scorpio. Mahindra has now released a new TVC for the new Scorpio Classic SUV.

The video has been shared by Mahindra on Scorpio’s YouTube channel. The TVC highlights the changes that are there are on the Scorpio Classic and showcases it as a butch looking SUV. The Scorpio Classic gets a revised front grille. To be precise, the grille gets new vertical chrome slats with new Mahindra logo in the centre. The LED DRLs inside the headlamp cluster has been retained and it continues to offer projector headlamps. The bumper gets minor tweaks and there is a new LED DRLs just above the fog lamp. A faux skid plate is also seen at the front.

The bonnet of the Scorpio Classic gets a hood scoop and there are character lines which give it the SUV a muscular look. Coming to the side profile, the SUV gets 17 inch machine cut alloy wheels. Many might find the design of the alloy wheel dated. Especially when you compare it with Scorpio N and XUV700. The body cladding which is finished in gloss black can be seen around the wheel arch and the lower part of the doors like before. The Scorpio Classic branding is also seen on the door. The turn indicators are integrated into the fender and not on the ORVMs. The door handles are body coloured and there are roof rails too. 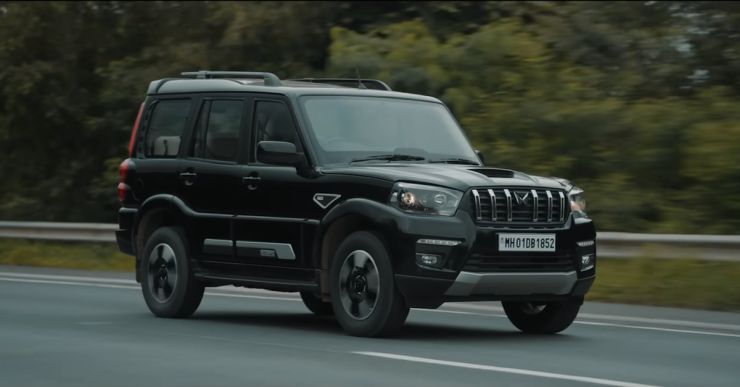 At the rear, the SUV gets Scorpio classic branding and Mahindra’s new logo. The tail lamp has also seen some changes. The pillar lamp which was missing from Scorpio for some time has come back in the Classic version. Moving in, the interiors remain the same. The SUV gets a beige colour theme for the cabin to make it look more airy and premium. The SUV gets multi-function steering wheel, cruise control, automatic climate control, a simple touchscreen infotainment system and so on. Unlike Scorpio N, the Classic version does not offer an electric sunroof or an electrically adjustable driver seat.

Mahindra Scorpio is one of those SUVs that has been present in the Indian market for almost 2 decades and still has not lost its popularity. The SUV is still doing good in terms of sales and recently, Mahindra decided to make some cosmetic changes to the SUV to give it a fresh look while…

Previous Post
Quick drive impressions of the mild hybrid manual and automatic, and the strong hybrid variants
August 20, 2022
Next Post
This man drove the same Rolls Royce for 77 years
August 20, 2022