Mahindra Thar gets stuck while off-roading in a fiel

Mahindra Thar is undoubtedly one of the best 4×4 SUV available for sale in India at this price bracket. It was launched in 2020 and quickly became popular among buyers for its looks, features and price. It is one of the most affordable 4×4 SUV one can buy in India. There are several videos of Mahindra Thar performing off-road. It is not a perfect off-roader and there have been instances where the current generation Thar got stuck and was rescued by other vehicles. Here we have one such video, where Mahindra Thar that got stuck while off-roading in a field was rescued by a tractor.

The video has been uploaded by Arun Panwar on his YouTube channel. In this video, vlogger and his friend drive a Mahindra Thar in a paddy field. The field was filled with water and it was very slushy. Vlogger engaged 4 High in his Mahindra Thar first and then decided to engage 4 Low as the field was too slush. After engaging 4L, vlogger’s friend drove the SUV right into the field. He was not carrying enough momentum and soon the wheels started to spin freely. Vlogger turned off the traction control and the Thar soon started moving without any issues.

After some time, vlogger sat on the driver seat and started driving the Thar through the field at good speed. The dirt was splashing all over the place and within matter of minutes, the whole SUV was covered in dirt. Vlogger even drove the SUV in the field without cleaning the windscreen for some time. Mahindra Thar was performing pretty well in the field. The all-terrain tyres were performing well in the field. After some time, vlogger brought the SUV out of the field. It is not clear whether the SUV was driven in 4L or the driver shifted it to 4H. Even after getting the SUV out from the paddy field, vlogger did not disengage 4×4 and was driving the SUV rashly through the uneven dirt roads and fields. 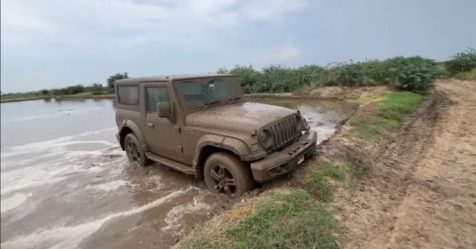 They even managed to get the Thar stuck just outside the paddy field. The SUV got beached on a small dirt wall which separates the field and the road. After getting stuck, the vlogger asked a tractor to push the SUV to get the Thar free from the spot. It looks like there was no back up vehicle and the vlogger was also not carrying a rope or recovery equipment with him. The Mahindra Thar was then pushed with a metal portion at the rear of the tractor. The metal came in contact with the plastic portion on the aftemarket off-road bumper and it took away some of the fibre glass portion from the area. He should have either pulled the SUV from the rear with a rope instead of pushing it directly.

The tractor successfully pushed the SUV back and the Thar was free. The vlogger did perform similar types of stunt in field for some more time before coming back to the road. He did not disengage 4L and was driving the SUV over 20 kmph speed. This is actually not recommended and it can even damage the gearbox. 4×4 must only be engaged in an SUV when the vehicle is going off-road. In all the other places, 2WD is enough. One must also carry at least a rope to recover the vehicle in case it gets stuck. Last but not the least, never go for such off-roading expeditions alone. Always have a backup vehicle which can help in case of an emergency.

Mahindra Thar is undoubtedly one of the best 4×4 SUV available for sale in India at this price bracket. It was launched in 2020 and quickly became popular among buyers for its looks, features and price. It is one of the most affordable 4×4 SUV one can buy in India. There are several videos of…