Mahindra Thar is one of the most affordable 4×4 SUVs one can buy in India. As we already know, it is a very popular SUV among buyers and we have seen several videos where Thar is seen showcasing its off-road capabilities. Thar is without any doubt a capable off-roader but, there are obstacles where even the best off-road SUV in the market might get stuck. There are several video where the current generation Mahindra Thar is seen stuck either in slush or some other obstacle. Here we have one such video, where a Mahindra Thar that got stuck while off-roading was rescued using recovery crane.

The video has been uploaded by Dillu cvl n their YouTube channel. When the video starts, the Mahindra Thar is seen stuck on a steep slope inside a tea plantation. The person recording the video can be heard saying that they drove the car down the slope to do off-roading but the SUV could not climb up because the soil was too slippery because of rain. It looks like the driver tried hard to get the vehicle up but, the wheels only kept on digging deeper into the soil. Once they realised that the SUV was not coming out, they called for help and started looking for recovery vehicles.

There was no other vehicle with the Thar and that is one of the mistake that these people did. Never go off-roading with only one vehicle. It is always a good idea to have a backup vehicle. In case any one of the vehicle gets stuck, the other car can actually pull the stuck vehicle out. After some time, they came back with a recovery crane. As the Mahindra Thar is in stock form, it does not have a winch or any other off-road spec modification. The crane came to the spot and the operator started analysing the spot and best way to pull the Thar up. They attached the winch to the Thar and slowly started pulling the car out. 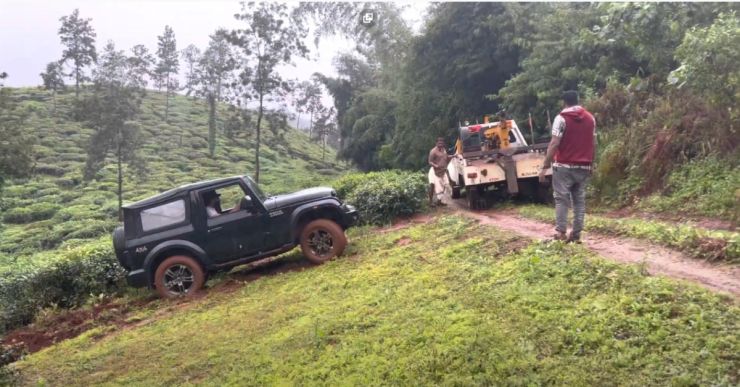 Initially, the crane had to put more effort as the SUV was stuck in soil. The driver also accelerates to make things easier for the crane. The crane slowly pulls the SUV out and just before pulling it up on the road, the crane driver stops and takes the crane back. The vlogger can be heard saying that they saw the slope and thought of taking the SUV down for off-roading. It was a mistake especially with a Thar that has no off-road spec modifications. The group waits for the crane to come back and pull the SUV out completely. The crane had to go back and come back in reverse as the road was so narrow that the crane cannot be turned around. If the Thar was running on MT tyres, instead of AT there was a slight possibility that it would have performed well. Tyres play a crucial role while off-roading and this video is a great example why one should not take an SUV off-road without actually checking the surface, without recovery vehicles and recovery equipment.

Mahindra Thar is one of the most affordable 4×4 SUVs one can buy in India. As we already know, it is a very popular SUV among buyers and we have seen several videos where Thar is seen showcasing its off-road capabilities. Thar is without any doubt a capable off-roader but, there are obstacles where even…