A video of youngsters doing stunts on the new-generation Mahindra Thar soft-top is going viral on the Internet. The video is from Gaddopur Pethia of Tajpur police station in Jharkhand. The youngsters were reportedly trying to recreate scenes from Bhojpuri songs when the accident happened.

The video shows the Mahindra Thar soft-top full of youngsters. The driver starts making tight turns at high speed in an open park. As the speed increases, the Thar rolls over on its side, throwing out the youngsters from the car. More than 6 youngsters in the vehicle got serious injuries from the accident and were admitted to the hospital.

There is no roof attached to the Thar. Since it is a soft-top model, the youngsters removed the roof. In such situations, the rollover of the SUV can be very dangerous and it can crush the occupants of the car. If you noticed, the Mahindra Thar gets a roll cage, which ensures the safety of the occupants during such events. However, the roll cage only works if the occupants have their seatbelts on. Without the belt, they can fall out, like we saw in the video and can get crushed by the car.

The accident happened on 15th August when they were celebrating India’s 75th Independence Day.

However, all of the youths in the SUV were reportedly drunk and were partying at the spot before the incident. The video has become viral on social media platforms and the police have started investigating the matter.

While the police are yet to officially comment on the development, we may see action against these youngsters in the coming week.

People attempting stunts and failing, injuring themselves – occasionally fatally – is becoming commonplace now across the country. Little skill, too much enthusiasm, and the confidence that comes with a young age seem to be the main culprits behind these acts. World over, young people tend to get into accidents much more easily than older generations. And India is no exception. We have seen dangerous swerving in traffic without helments on two-wheelers, wheelies and stoppies so often that we are numb to them now!

Videos are used as evidence 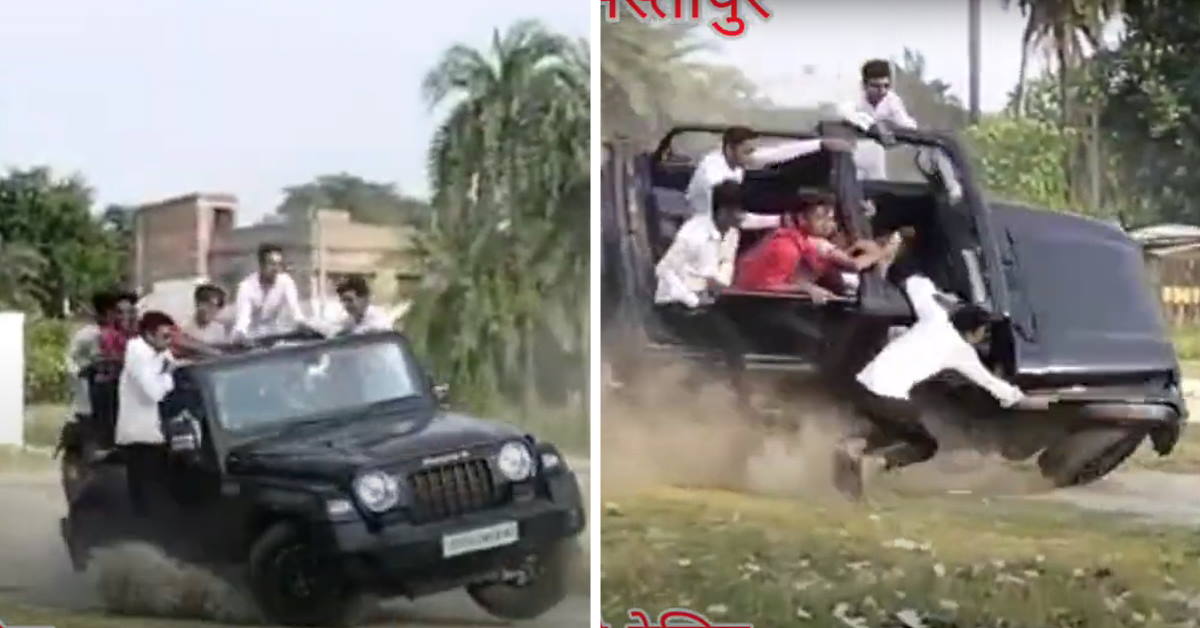 Doing any kind of stunts on public roads is illegal and the violators can even go to jail along with paying massive fines. Doing stunts on public roads can land you in a spot due to various reasons. If anyone wants to practice stunting or want to record videos, it should be done on private property such as race tracks and even farmhouses. Also, one should take note that such stunts are extremely dangerous.

The video shows very dangerous stunts. None of them is wearing any kind of safety equipment like a helmet or protective gear like a knee pad or elbow protectors. Any mishap can go wrong during such stunts. Imagine just slipping down from the bonnet while the vehicle keeps on moving. It can end in a disaster.