The prominent SUV manufacturer of the nation Mahindra that is approaching the launch of the newest generation of its iconic SUV Scorpio-N, was recently reported to have trademarked the name ‘4Xplor’. According to various sources on the interwebs, this new moniker will be used to identify the higher four-wheel-drive variants of the SUV. Rumours have also suggested that these 4X4 variants will go on sale later this month and the prices are expected to start from Rs 12 lakh onwards (ex-showroom). 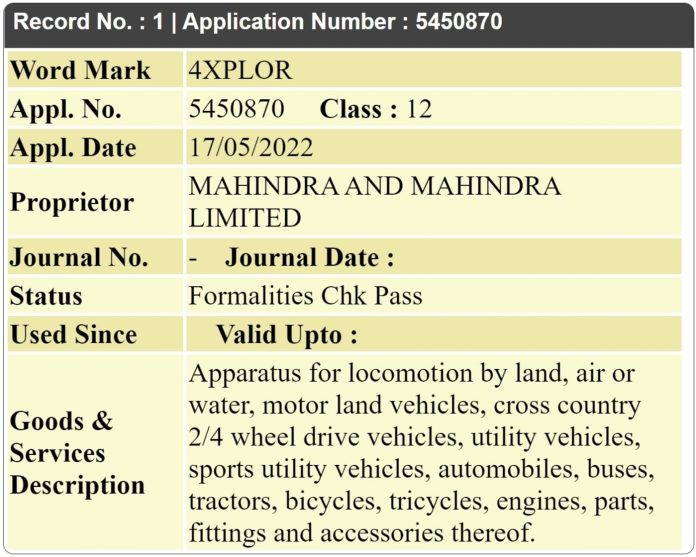 Sources have also claimed that the new Scorpio-N 4Xplor will come equipped with a four-wheel-drive system with high and low ratios that can be switched on-the-fly via using the control mounted on the central console. A terrain mode dial will also be available for several types of slippery surfaces such as rock, sand, mud, and snow. Under the skin, the system will be pretty much identical to the 4WD configuration that is currently seen on the outgoing Mahindra Thar.

It will sport the independent front suspension and a solid rear axle, and like the Thar, the Scorpio N will also include features such as a hill descent control, a mechanical locking rear differential, and a brake-locking front differential for off-roading. It will also feature the off-roading metrics on the infotainment system, similar to the Thar.

Moreover, the SUV will be equipped with an intelligent 4WD technology that will send power to all four wheels only when necessary. The Scorpio’s internal computer will also automatically activate or deactivate the 4×4 system depending on the specific amount of traction on the road. Although Mahindra will still give the drivers, some command over this new system.

As for the drivetrains, Mahindra will offer the Scorpio-N with a 2.0-litre mStallion turbocharged petrol engine and a 2.2-litre mHawk diesel engine. Both the engines will be offered with a 6-speed manual gearbox or a 6-speed torque converter automatic gearbox. As of now, we are not sure about the power and torque outputs of both engines.

Recently after revealing the exterior of the Scorpio-N the company went ahead and released a video showcasing the all-new interior of the SUV. In the video, the SUV can be seen with captain seats for the second row and we also get a glimpse of the bench seat that will be offered in some variants. The interior in the video is finished in a tan brown and black theme. The seats have perforations and will most probably be made out of leather and also have white stitching.

There will be vertical AC vents, soft-touch materials for the dashboard, a large touchscreen infotainment system, dual-zone climate control and a sound system by Sony. There will also be a sizeable electric sunroof. It is also expected to get the support of Android Auto, and Apple CarPlay with the infotainment system which will come with user profiles and run on AdrenoX. There will be grab handles on A-pillars to make it easier for the occupants to get inside.

The prominent SUV manufacturer of the nation Mahindra that is approaching the launch of the newest generation of its iconic SUV Scorpio-N, was recently reported to have trademarked the name ‘4Xplor’. According to various sources on the interwebs, this new moniker will be used to identify the higher four-wheel-drive variants of the SUV. Rumours have…