Mahindra XUV700 with an aftermarket exhaust is probably India’s loudest

The video has been uploaded by Vikram Malik Boxer on their YouTube channel. In this video, vlogger takes his Mahindra XUV700 AX5 petrol manual SUV to an aftermarket silencer shop to replace the stock unit with an aftermarket unit that would sound bit more loud and sporty. This is not the first time, vlogger is making such a modification to any of his car. He recently did a similar type of modification to his Mahindra Thar diesel. He installed Mercedes-Benz G-Wagen style exhausts in his Thar and was so impressed with the work that he brought his XUV700 to the same garage.

As Mahindra Thar was a diesel SUV, even after installing an aftermarket exhaust it was not sounding as sporty as he wanted it to be. In Mahindra XUV700, the stock exhaust pipe in the Mahindra XUV700 was chopped using a gas cutter. A set of custom made straight pipes were connected to the remaining pipe coming from the engine. The muffler was not installed on the car yet and the vlogger shows how the car sounds without a muffler to show the difference from stock. Mahindra XUV700 was sounding like a rally car and was pretty loud. The owner or the vlogger was very happy with the sound and was excited to hear how the SUV would sound after the pipe is connected to the muffler. 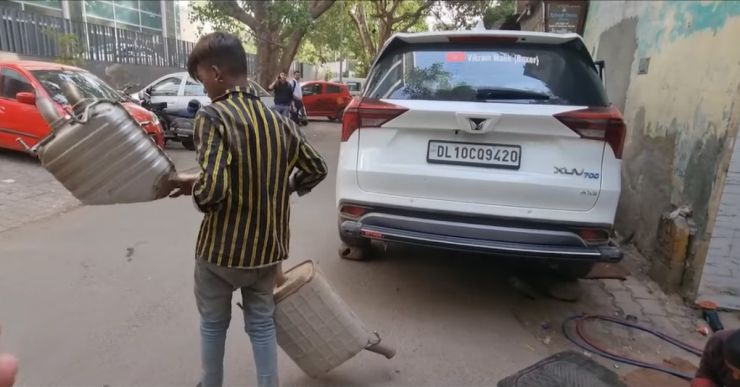 A piece of metal pipe was then fabricated to connect to the muffler which was already installed to the car. After connecting to the pipe the exhaust note changed a bit. It was not as loud as it was before but it now has a very sporty note. The car gets an Akropovic muffler with carbon fibre tip. The exhaust is now converted into a straight pipe unit with an exhaust tip. The stock exhaust of the XUV700 was not thrown away. The workshop tells him that if he wants to get the stock exhaust installed in future he can get that done without any issues.

Mahindra XUV700 is available with both petrol and diesel engine options. The vlogger owns AX5 version which comes with decent list of features like alloy wheels, fully digital instrument cluster, touchscreen infotainment system and so on. Both the engine options are available with manual and automatic transmission and the top-end diesel automatic gets AWD as an option and is the only SUV in the segment to offer this feature.