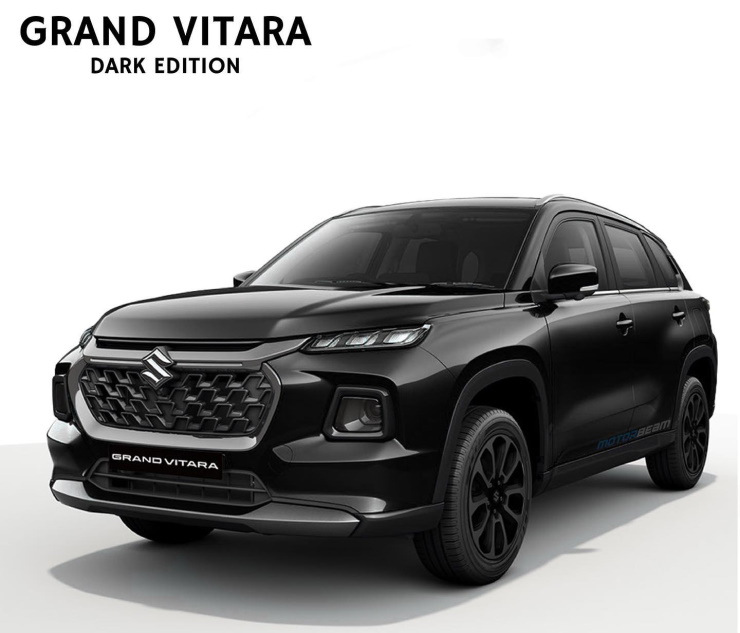 Now, Dark Edition SUVs – made popular by Tata Motors – do look quite mean and muscular.  However, other automakers save for Kia Motors (Seltos X-Line limmited edition) have yet to launch their own versions of Dark Edition vehicles. The reason for this is ‘sentiments’. Indians, as a car buying populace, are generally averse to anything that’s totally black. Black is considered inauspicious among many.

In Dark Edition models sold by Tata Motors, which includes the Altroz, Nexon, Harrier and Safari, nearly every external body part is blacked out. While this gives the Dark Edition models a mean look which a lot of youngsters fancy, most car buyers steer clear from such colours. Maruti Suzuki generally aims at the meat of the car buying population, and is unlikely to launch a Dark Edition of the Grand Vitara.

For all those interested in a Maruti Grand Vitara Dark Edition, the aftermarket has a couple of options for you. One, you could opt for a wrap job that covers the Grand Vitara in black wrap, either in glossy or in matte finishes. Another option is to get the SUV repainted in matte black or glossy black, and dechroming the chromed parts. However, do note that changing a car’s colour without getting it endorsed in the Registration Certificate (RC) is illegal in India. So, if you do plan to change your car’s colour, ensure that you get it endorsed on the RC.

The Grand Vitara is Maruti Suzuki’s S-Cross replacement, and will be retailed through the NEXA chain of dealerships. The SUV has a Toyota-badged sibling called the Hyryder Urban Cruiser. Both SUVs will be built by Toyota, at its Bidadi factory near Bengaluru. While Toyota will launch the Hyryder Urban Cruiser on the 16th of August, the Maruti Suzuki Grand Vitara will arrive sometime in early September. Both SUVs have been officially unveiled, and bookings are now open. The crucial price announcement will happen on the day of launch though.

Both SUVs get petrol strong hybrid powertrains – a best-in-class feature – and will be able to operate on all-electric mode for about 25 kilometers. The other engine on offer will be a petrol mild hybrid, whose manual variant get the all-wheel drive – another class leading feature – option. A massive panoramic sunroof, ventilated seats, 360 degree camera and a head-up display are some of the key features on offer in both SUVs.