Maruti Suzuki Swift is still one of the most popular hatchbacks in its segment. Maruti introduced this popular hatchback over 15 years ago and is still doing great in terms of sales. All-generation of Maruti Swift were popular among youngsters and family audience. It is a hatchback that offers good looks and also does not compromise on the fuel economy part. We have seen several modified Maruti Swift from different parts of the country but here we have a modified Swift with Stage 2+ remap and performance mods on it.

The video has been uploaded by The Drivers Hub on their YouTube channel. In the past we have seen Swift with performance modifications but, most of them were petrol engine cars. This one is actually a diesel hatchback. The owner of this hatchback got several modifications to enhance the overall performance and also make it a much more fun to drive car. Starting with the exterior modifications, the car has been completely dechromed. All the chrome garnishes and even the logo on the grille has been blacked out.

The stock headlamps and tail lamps have been replaced with aftermarket units. The headlamp gets an LED DRL integrated into it. The bumper gets the Swift RS body kit which helps it with the stance. There are stickers on the fenders and doors as well. The grey shade of the hatchback looks good and helps in achieving a very sporty look. The other modification that one would notice outside the car are the wheels. The stock steel rims on the car have been replaced with JDM style aftermarket alloy wheels from Lenso. The tyres have also been replaced. 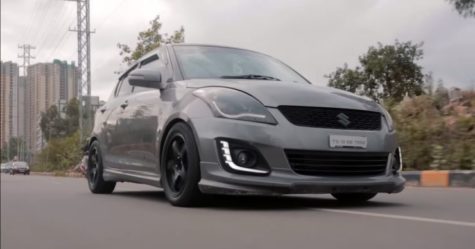 This Maruti Swift may look too close to the ground when compared to others. It is because, the owner has installed lowering springs on this hatchback for better looks and handling. The stock steering wheel has been replaced with a removable steering wheel from Momo brand. Coming to the performance mods on this Swift, the stock turbocharger on this hatchback has been replaced with an aftermarket unit. The new turbo on this hatchback was so big that the tuners had to reposition the turbo. They had to do a lot of plumbing to ensure that the turbo fits in properly. There is an aftermarket exhaust installed in this car and the downpipe has also been replaced. The stock air filters have been replaced with BMC and it also gets a custom made intercooler. The car is actually Stage 3 ready but, it currently 2+ tuning.

The vlogger even shows how the car sounds after all these modifications in place. The sound of the bigger turbo is quite evident but, as this is a diesel hatchback, the exhaust note is not as sporty as one would expect it to be. It also emits a lot of black smoke when you put your foot down. Vlogger mentions that the diesel engine on this car now generates around 110 crank horse power and the 248 Nm of torque. He was very impressed with the way the car was performing and he can be heard saying in the video that torque was available from a very low RPMs and was making it much more fun to drive.

Maruti Suzuki Swift is still one of the most popular hatchbacks in its segment. Maruti introduced this popular hatchback over 15 years ago and is still doing great in terms of sales. All-generation of Maruti Swift were popular among youngsters and family audience. It is a hatchback that offers good looks and also does not…