Mercedes-Benz S500, after accident, modified to look like a Maybach S560!

Car modification and conversion is becoming a thing in India. We have seen this trend with Innova and Fortuner owners. They usually convert their older generation Innova, Crysta or Fortuner to a newer generation to give it a fresh look. We usually see these types of modifications on budget and premium cars. People who own luxury cars specially sedans do not prefer such modifications. Modified luxury cars are rare but not non-existent. Here we have a video where the owner of a Mercedes-Benz S-Class modified the sedan to look like a Maybach.

The video has been uploaded by Rajni Chaudhary on her YouTube channel. In this video, vlogger talks to the garage owner who did all the modifications on this S-Class. The work is done by BASCA motors and the car looks very neat in the video. The car was actually involved in an accident and the garage suggested him to go for a S-Class to Maybach conversion. Some of the parts used in the car are original Mercedes-Benz parts while the others are aftermarket units. In the accident, front-end of the S 500 was completely damaged. This had to be mended first.

Once the front-end was repaired, it got new front grille, headlamps, bumper and even the lower bumper lip on this Mercedes is similar to a Maybach. A night vision camera has also been installed in the front grille just like in Maybach. Although most of the parts used at the front are aftermarket, they are of good quality and has also helped to keep the overall cost of the project low. Coming to the side profile, the main attraction on this car is the new alloy wheels. These are not original Maybach wheels but aftermarket units which resemble with Maybach. The wheel cap on these wheels are floating like Rolls Royce which helps in keeping the Mercedes-Benz logo up all the time. 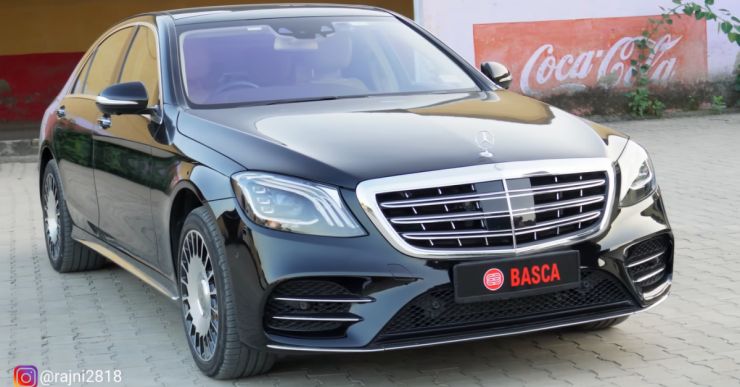 The original shade on this car was Silver, the owner wanted a plain black shade with no metal flakes in it. This shade is not even offered from the factory. This is a custom colour and even the smallest scratch is easily visible on the car due to this shade. This shade was done as per the request from the customer. A chrome garnish is seen on the lower part of the door on the side profile like in Maybach. The Mercedes logo on the bonnet, wheels and the rear are however not replaced with Maybach logo. At the rear, the tail lamps, bumper and the chrome garnish around the dual exhaust tips have been changed.

The interior on this car has been redone too. The sedan gets reupholstered interiors. The roof liner is all Alcantara and the seats are all wrapped in leather. A remote to control the rear entertainment screen has been installed in the car as well. The original steering wheel on the car was replaced with a new generation S-Class unit which was directly imported from Germany. The overall quality of the work done on this car looks brilliant and is a very neat looking car. The total cost of this conversion or modification work was around Rs 11 lakh.

Car modification and conversion is becoming a thing in India. We have seen this trend with Innova and Fortuner owners. They usually convert their older generation Innova, Crysta or Fortuner to a newer generation to give it a fresh look. We usually see these types of modifications on budget and premium cars. People who own…