Video of a minister from Andhra Pradesh went viral on internet after she was spotted driving an autorickshaw. RK Roja who is currently the Tourism minister of Andhra Pradesh decided to be an auto driver as part of an event. The event was related to the fourth phase of Vahana Mitra which is a scheme by Andhra Pradesh government to increase the income and reduce the expenses of taxi repair by providing financial assistance to the financially weak taxi drivers. YS Jagan Mohan Reddy led Andhra Pradesh government recently released the funds for the fourth phase of the scheme at the Minister RK Roja drove the autorickshaw at the event.

The video report has been shared by Sakshi TV Live on their YouTube channel. The event was conducted in Tirupati and the minister drove the auto with passengers in it. It looks like, the minister did not take the autorickshaw to the roads. She is seen driving the auto in a closed premises. It is probably an area next to the place where the event was conducted. The Minister is seen wearing an auto driver’s uniform and driving an autorickshaw. Initially, Minister RK Roja is accompanied by a professional auto driver. It looks like, the driver was giving her instructions on how to drive the auto.

The auto driver was sitting next to the Minister and the passengers who were probably the people who came to attend the event were seen at the back seat. The Minister drives the auto within the premises for sometime. After getting familiarised with the driving style, she can be seen driving the auto alone. Her security and camera people from several news channels can be seen running along with the auto which the minister was driving. 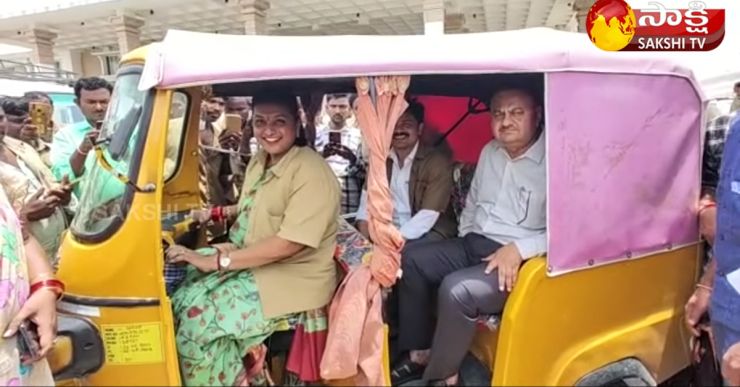 The Vahana Mitra scheme is a financial assistance scheme from Andhra Pradesh government for auto and taxi drivers in the state. Under this scheme the auto and taxi drivers in the state would get Rs 10,000 per annum as a financial assistance. The benefit will be offered to all drivers who have registered themselves online under the YSR Vahana Mitra scheme. The benefits under the scheme would be transferred directly to the bank accounts of the drivers. Interested drivers can apply for this scheme online by visiting the official website. In the fourth phase of the scheme Rs 12.13 crore has been deposited to the account of 12,137 beneficieries. The list of beneficiaries was displayed at the ward and village secretariats. The scheme is only applicable for those driver’s who drive a self owned autorickshaw or a taxi.

Recently a video of two Sri Lankan cricketers who are now settled in Australia had gone viral on the internet. The former Sri Lankan spinner Suraj Randiv and Chinthaka Jayasinghe have now become bus drivers in Australia. It is not clear as of when these players decided to choose bus driving as a full time job. Sri Lanka is currently struggling both economically and politically and it is not clear whether that was one of the reason why these players chose to leave their country and work in a foreign land.

Video of a minister from Andhra Pradesh went viral on internet after she was spotted driving an autorickshaw. RK Roja who is currently the Tourism minister of Andhra Pradesh decided to be an auto driver as part of an event. The event was related to the fourth phase of Vahana Mitra which is a scheme…