Hyundai Verna is one of the popular mid-size sedans on offer in India. Hyundai Verna has been a popular car in the modification circles and we have seen several examples of neatly modified Verna sedans from different parts of the country. We have featured many of them on our website as well. Hyundai Verna competes with cars like Maruti Ciaz, Honda City, Volkswagen Virtus and Skoda Slavia in the segment. Here we have a previous generation Hyundai Verna that has been neatly modified on the outside and gets premium interiors.

The video has been uploaded by Autorounders on their YouTube channel. The car was dropped at the workshop for work as the owner was working abroad. He wanted to a Dark Edition look to his sedan. There were several minor scratches and dents on the car when it arrived at the workshop. The discussion about the modifications and other changes were all discussed over the phone. The work started on the car and the panels like the front bumper, headlamps, grille were all removed from the car.

The team started working on the dents on the car. The small dents were all levelled out using special tools and once that was done, a thin coat of putty was applied on those panels. The excess putty was later removed during the sanding process. Once that was done, the original paint from the car was removed and the car was taken to the paint booth. The door panels were also removed when the exterior work was being done. Once  car was in the paint booth, the whole car was given a deep black paint job. It was not matte black so, a coat of clear coat was also applied on to the car. The chrome garnishes on the window, the front grille were also given a gloss black finish. 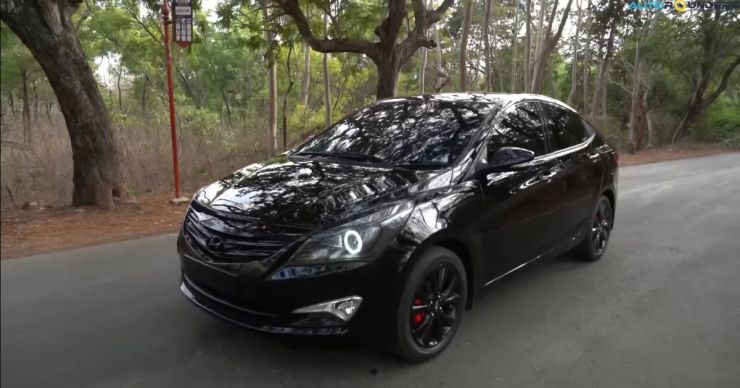 The wheels on the Hyundai Verna were stock. Owner was not planning to change or modify them. So he went ahead and asked Autorounders to paint the wheels completely black. The brake calipers were finished in Red for a sporty look. The quality of paint used on this Verna was very premium and it was quite visible in the end results too. The whole car finished in black and that was giving it a very unique look from the outside. The headlamps and tail lamps on this sedan were stock units only.

The owner of this car also wanted the interior of this car to be customised. The workshop chose a ice grey themed interior which was looking extremely premium on the car. The seat covers were all custom made and the door panels were also redone. The custom seat covers had diamond patterns in them and they were fitting neatly to the seat. Ambient lights were installed and the steering wheel was wrapped in leather too. Overall fit and finish of the interior also looked very neat and the car was looking sporty on the outside and premium from inside. The owner was very impressed with the work as well.

Hyundai Verna is one of the popular mid-size sedans on offer in India. Hyundai Verna has been a popular car in the modification circles and we have seen several examples of neatly modified Verna sedans from different parts of the country. We have featured many of them on our website as well. Hyundai Verna competes…