While acing in the circuits of business, the Ambani family has also become famous for its choice of flamboyant cars. Be it fast sports cars or luxury sedans or SUVs, the Ambani garage has it all. The family already owns a few top-of-the-line offerings from luxury brands like Rolls Royce, Bentley, Mercedes-Benz, BMW, and many more. After bringing home the fifth Rolls Royce Cullinan, the latest addition to the Ambani garage is a red-coloured Bentley Bentayga.

In a video uploaded by CS 12 Vlogs on YouTube, we can see the new red-coloured Bentley Bentyaga acquired by the Ambani family, rolling on the streets of Mumbai. The video includes a few footages of the Bentayga from both day and night, in which the mammoth luxury SUV is seen escorted by a particular SUV with security guards in it. On the roads of Mumbai, the Bentyaga looks glorious and puts up a show of its glorious road presence with ease.

This new red-coloured Bentley Bentyaga is not the only version of the luxury SUV present in the Ambani garage, as reportedly, there are three more Bentaygas in the garage. The family first bought an Emerald green-coloured Bentayga a few years ago, and since then, it has bought more Bentaygas in different shades. A few days ago, Akash Ambani and Shloka Mehta were also spotted arriving at Bollywood actor Ranbir Kapoor’s home in his white-coloured Bentayga.

The Ambanis were one of the first to receive the delivery of the Bentley Bentayga in India. Finished in a beautiful Racing Green shade, this is the only Bentley in the country to have the Breitling Mulliner Tourbillon watch that itself costs more than Rs 1 crore. This is the top-end, high-performance version of the Bentayga that gets powered by a 6.0-litre W12 petrol engine. It generates a maximum power of 600 Bhp and a peak torque of 900 Nm. The Ambani family does not use this car a lot even though Akash Ambani has been spotted driving the car on multiple occasions.

Soon after the delivery of their first Bentayga, the family received their second Bentayga. It is the cheaper of the two but still costs multiple crores. This is mostly used by the younger son – Anant Ambani and it has a crazy psychedelic wrap on it. It also offers an array of high-end features and is one of the most luxurious vehicles ever made. It gets powered by a 4.0-litre V8 engine that generates a maximum power of 542 Bhp and peak torque of 770 Nm. 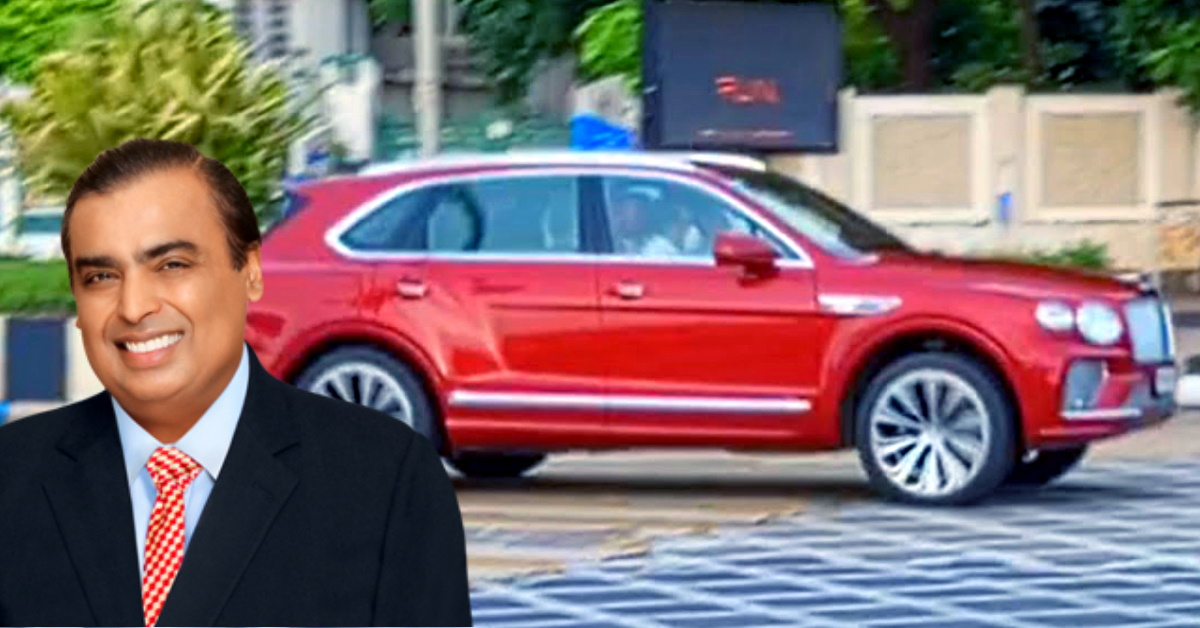 In addition to a slew of Bentaygas, Ambani garage also has a few other luxury vehicles from the brand, including the Mulsanne, Continental GT and Flying Spur. The family also owns some other high-end luxury cars and SUVs like Rolls Royce Cullinan, Phantom and Phantom Drophead Coupe, Mercedes-Maybach S-Class, the regular versions of the S-Class, and a few other SUVs and sedans from Mercedes-Benz and BMW. The family also owns a few other sports cars and SUVs like Aston Martin Vantage, Lamborghini Urus, Maserati Levante and more.

This new red-coloured Bentley Bentayga is the latest facelifted version of the SUV, which comes with a 4.0-litre twin-turbocharged V8 engine under its hood. Also available in a few other SUVs like Porsche Cayenne, Lamborghini Urus and Audi RS Q8, this twin-turbo V8 is in a different state of tune here and produces a maximum power output of 550 PS and a peak torque output of 770 Nm. An 8-speed automatic is the standard choice of transmission on offer in the Bentley Bentayga.

While acing in the circuits of business, the Ambani family has also become famous for its choice of flamboyant cars. Be it fast sports cars or luxury sedans or SUVs, the Ambani garage has it all. The family already owns a few top-of-the-line offerings from luxury brands like Rolls Royce, Bentley, Mercedes-Benz, BMW, and many…