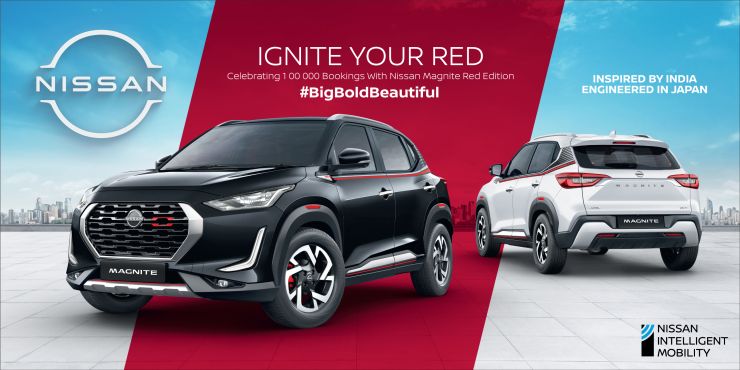 Speaking at the launch, Rakesh Srivastava, Managing Director, Nissan Motor India, said, “The Big, Bold, Beautiful Nissan Magnite has been a memorable addition to many homes nationwide with over 1 lakh bookings since launch. The new Nissan Magnite RED Edition will accelerate the already-robust demand for the Nissan Magnite with an evolved offering for a young, aspirational, and tech-savvy audience, the RED Edition’s best-in-segment features will greatly enhance comfort and convenience for our valued customers with a Big, Bold, Beautiful visual update.”

In terms of changes the front grille, front bumper cladding, wheel arch, and body side cladding all have a unique red accent that distinguishes the RED Edition from other models. Meanwhile, the interior gets a centre console with a red accent, a door side armrest with a luxury red motif, and a red dashboard. Bold body graphics, a tail door garnish, and a large RED Edition-specific insignia are also some of the major design upgrades. The R16 diamond-cut alloy wheels, an LED fog lamp and LED Daytime Running Lamps (DRLs) are all still part of the RED Edition like the normal top-spec model.

Also read: Renault Triber facelift: What it could look like

A wireless charger, a PM 2.5 air filter, an LED scuff plate, and ambient mood lighting that creates the ideal ambience are just a few of the Nissan Magnite RED Edition’s additional features. Furthermore, an 8.0 touchscreen with Wi-fi connectivity for Android Auto & Apple Carplay, a 7.0 full TFT instrument cluster, and a Rear-View Camera with a Projection Guide are other significant elements that come in the Magnite. Push Button Start/Stop, Vehicle Dynamics Control, Traction Control System, Brake Assist, and Hill Start Assist are all included in the RED Edition Magnite as well. As for the drivetrain options the 1.0-litre MT, 1.0-litre Turbo MT, and 1.0-litre Turbo CVT will come in the Nissan Magnite RED Edition.

In other Nissan Magnite news, it was reported in March of this year that Nissan has begun developing a 7-seater version of the vehicle. The manufacturer originally intended to simply rebadge the Renault Triber, but Nissan and Renault automobiles haven’t been successful at doing so. Nissan made the decision to create a whole new product, although this will cost more to produce. Nissan won’t alter the architecture or layout in any way. Consequently, the Magnite’s boot will be equipped with a second bench seat. They ought to be able to fold, which would increase the boot’s use. Folding the second row, which has split seats that are 60:40, will provide access to the third row.

Nissan Motor India, the Indian division of the Japanese automaker Nissan, recently announced the launch of the RED Edition, the latest iteration of their sub-compact SUV Magnite. The manufacturer revealed that the cost of this new version will begin at Rs. 7,86,500 lakh (ex-showroom, Delhi). The Magnite RED Edition is based on the widely popular…