The video has been uploaded by BROTOMOTIV on their YouTube channel. The video shows a previous generation Mahindra Scorpio mHawk which is badly damaged in an accident. The front-end of the car was completely damages. The owner of the SUV claimed insurance and the vehicle was repaired under insurance. As the front-end of the Scorpio was badly damaged, some of the parts had to be replaced with new ones. All these parts were sourced from Mahindra and as this is an older model, it took some time to get the exact parts.

The broken bumper, grille, headlamps, fog lamps, bonnet windshield were all removed from the car. The dashboard was also removed and the engine was taken out so that the engine bay can be repaired properly. Only after taking the engine out, they realised that the chassis was also damaged at one point. This was corrected using a tool that they built. This helps in getting the chassis of any vehicle straight. The front fenders and other metal panels at the front of the Scorpio were removed and they were all replaced with brand new units from Mahindra. Before finalising, a trial was done to ensure that the parts and panels were fitting properly. 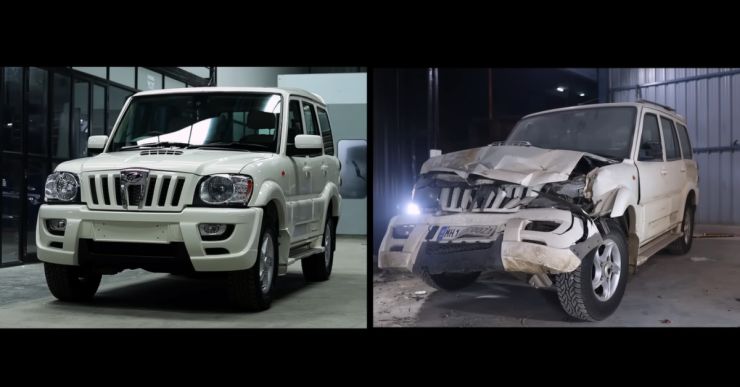 The owner asked the workshop to completely repaint the vehicle as it would give the car a new look. Once the panels for the bonnet and engine bat were installed and welded together. A coat of primer was applied to the engine and body sealant was also applied on to the corners. Once this had dried out, the team started working on rest of the car. The minor dents and scratches on the Scorpio were marked and were all corrected. A thin coat of putty was applied and the excess putty was removed during sanding process. The colour of the Scorpio was painted in the same off-white shade which was offered from the factory. The stickers on the side panels which had started to fade away were removed for a clean look.

Once this was done, the whole car was taken to the paint booth and a coat of primer, base coat and gloss was applied on the SUV. Each panel was painted individually to get a factory finish. Once this was done, all the panels and engine was put back and the Scorpio was looking like a brand new SUV right from the factory.

Mahindra Scorpio is one of the most talked about SUVs in the market at the moment. The manufacturer launched the new generation Scorpio N and like any other Mahindra, Scorpio N has been priced competitively. The previous generation Scorpio will still be offered on sale and that is quite a good news for many who…