We have seen several videos of people who ride to Ladakh or even take their cars to such challenging location. Most of them are aware about the road conditions in this mountainous region of the country and usually prefer taking SUVs or vehicles with higher ground clearance for such trips. In some cases, we have also seen people taking sedans on such trips. We have featured many such vlogs and travel videos on our website in the past. Here we have a video a person decided to take things to next level by taking a BMW E92 M3 sports car to Zoji La Pass.

The video has been uploaded by kabir.sheikh786 on his Instagram profile. Driving an SUV or any other car with higher ground clearance is different from driving a sports car on such terrains. As seen in the video, there are places where there is no tarmac. The owner can be seen carefully driving the M3 through the tracks with rocks from the river. But why did he do it. Well, as per the caption that the owner put on this video, he is part of a sports car owners group and they were lately planning for a supercar drive from Delhi to Srinagar. They might even drive the supercars to Ladakh and before, they actually do it, he wanted to check if the roads are actually suitable for supercars.

The video mentions that the car cleared the section without any major problems. As mentioned above, sports cars and supercars are built for track. On mountain road which does not have tarmac in many places, it might get challenging. The main issue that most of the sports car owners would face on such stretch is the ground clearance. The chances are quite high that these cars would get the underbody scraped. They might even get beached at some places as there are many uneven roads. The BMW M3 cleared the section but, it is not necessary that other cars with even lesser ground clearance would manage to do that without any damage. 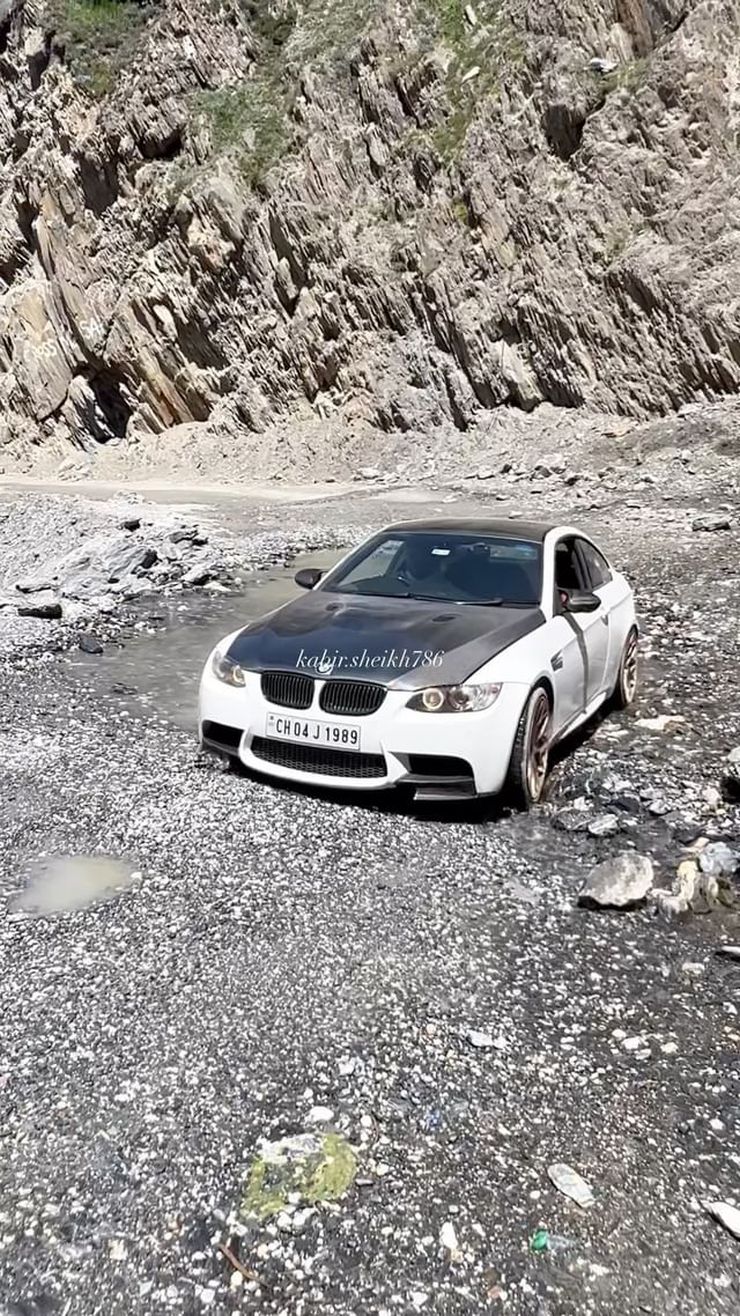 Another issue that many would face is the quality of fuel. Most of these performance cars require high octane petrol and the availability of this fuel is quite less in this region. Other than this if any of these cars get damaged during at this place, then getting it back to a nearest service station will be an expensive task. Supercars and Sports cars as we know are not like our regular set of wheels and they require experienced service personnel and equipment to repair. In the past, we have seen many YouTubers taking expensive motorcycles through the same route and they managed to do it with minor inconveniences. We have even done a story about a vlogger who rode his Suzuki Hayabusa to Ladakh. Specially after the second wave of pandemic, more people have started to explore such destinations. Even caravanning culture is blooming in India and there are many garages that help you convert your car into a camper so that you don’t have to compromise on the comfort while travelling to such destinations.

We have seen several videos of people who ride to Ladakh or even take their cars to such challenging location. Most of them are aware about the road conditions in this mountainous region of the country and usually prefer taking SUVs or vehicles with higher ground clearance for such trips. In some cases, we have…