Pedestrians who become jaywalkers are a major nuisance on the roads, especially during rush hour, and jaywalking is a traffic law violation. But a magistrate’s court in Mumbai has refused to show any leniency to a 24-year-old student and sentenced him to 6 months of Rigorous Imprisonment for crashing his bike into a couple in Andheri back in 2019 and then trying to flee. The impact caused the 1.5-year-old daughter of the couple to fall on the road and suffer a head injury. The toddler had to spend a long time in the ICU and is still unable to speak. 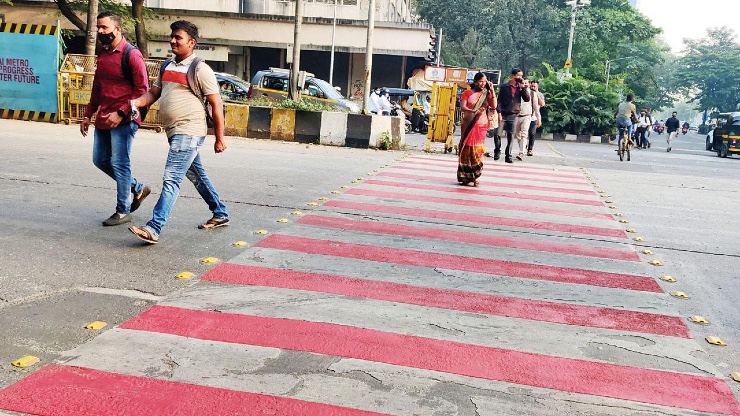 The court rejected the defence of the accused who claimed that there was no zebra crossing at the spot and the motorcyclist is not at fault. But the court said that the number of accidents is growing at an alarming rate and lakhs of small children and adults die in road accidents. Under the Probation of Offenders Act, an accused can release on a bond of good behaviour instead of serving a sentence. The court, however, refused to let off the accused Mohammed Ahmed.

Further, the accused was directed to pay Rs 30,000 to the child’s parents as compensation. The accused, who tried feeling the spot was caught by the crowd.

No Zebra crossing, no problem

The court noted that the public is not expected to search for zebra crossings, which are the designated places to cross a road. The court said that the absence of zebra crossing or traffic signal is not within the control of the prosecution witnesses or the accused.

“Admittedly, the spot of incident is not a highway. It is an internal road near the hotel. So, it is not expected for the general public to search for zebra crossings or traffic signals before crossing the road. On the contrary, it is the responsibility of the rider to consider the peculiar situation on the road and control the speed limit.”

The court observed that the accident happened on an internal road or what we call a street in plain language. While there are no separate laws in India for roads and streets, there are many countries where such different laws do appear. If we interpret the law strictly, it may mean that the public is not allowed to cross a street or road anywhere except where there are zebra crossings. However, as we know, that is absolutely impractical in a country like India with a huge number of internal roads, small roads – and where almost everyone is a jaywalker according to the law.

What we think has happened in this verdict is that, in layman’s terms, the court has essentially said that the idea that zebra crossings are the only places to cross is not absolute. (We will wait for law experts to confirm this.)

Roads are supposed to cater to vehicles and fast movement takes priority. Streets are supposed to cater to people, with with homes and shops on the sides are often less guarded by the traffic police, have a lower number of red lights and motorists are expected to be more cautious on the streets. This however is an ideal scenario. In India, we have a big mashup of everything where we have roads and streets and everything in between without clear definitions for anything, and laws that are perhaps out of date or impossible to implement.

We are not sure if the accused will challenge the decision of the magistrate’s court by appealing at a higher court. We hope a higher court will clarity this verdict as motorists are worried about the judgement and how it would work in practice.

Pedestrians who become jaywalkers are a major nuisance on the roads, especially during rush hour, and jaywalking is a traffic law violation. But a magistrate’s court in Mumbai has refused to show any leniency to a 24-year-old student and sentenced him to 6 months of Rigorous Imprisonment for crashing his bike into a couple in…