Indian cricketer Shreyas Iyer was dropped from the team for the ongoing Asia Cup series. However, the cricketer is celebrating right here in India in grand ways. Iyer was spotted in his new Mercedes-AMG G63 SUV with the Brabus Kit. Interestingly, Shreyas Iyer already owned the Mercedes-AMG G3. However, he recently got the Brabus kit installed on his SUV which definitely makes it look radical.

While Brabus offers a range of upgrades and customisation options, we are not sure about the exact updates that Shreyas chose for his SUV. However, the basic body kit from Brabus for the G63 AMG costs somewhere around Rs 5 lakh. Plus there are a lot of customisation options and engine upgrades that can increase the value by multiple folds.

The new Mercedes-AMG G63 carries a big fat price tag of Rs 2.2 crore, ex-showroom, which makes it one of the most expensive SUVs in the market. Hardik Pandya is another cricketer who owns the Mercedes-AMG G63 and he has been using the car for a long time now, 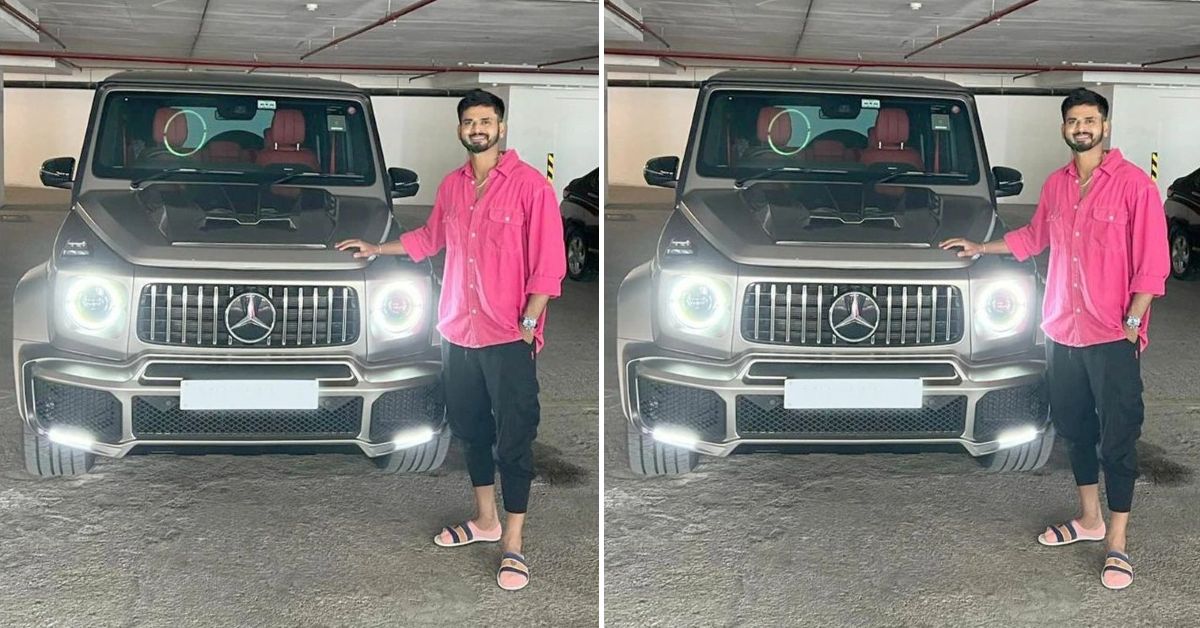 The new Mercedes-AMG G63 gets a host of changes and Mercedes-Benz claims that this is the best aerodynamically designed G-Wagen ever. In India, only the G63 version of the G-Wagen is available while there is a more powerful G65 version available in the international market. The new G63 AMG gets a slightly rounded shape when compared to the last version of the model. However, it retains the signature boxy design, which makes it unique and special.

It also gets a completely new headlamp cluster that gets a full-LED setup. It gets circular DRL around the headlamps and retains the bonnet-mounted turn indicators. Keeping the Geländewagen DNA alive, the car gets visible door hinges on the side too. It also gets a tailgate-mounted spare wheel and flared wheel arches that add a wide look to the SUV.

The Mercedes-AMG G63 rides on 21-inch seven-spoke alloy wheels and gets a massive 241mm of ground clearance. Even though most owners do not take the G-Wagen off-the-tarmac, it sure is an exceptional SUV when it comes to off-roading.

On the inside, the new G-Wagen gets Alcantara leather and carbon-fibre elements all around. It gets two 12.3-inch displays. One of the displays serves as the infotainment screen while the other is used as the instrument cluster of the vehicle.

The new Mercedes-AMG G63 is powered by a 4.0-litre bi-turbo V8 petrol engine. It produces a massive power of 585 Bhp and a peak torque of 850 Nm. Mercedes-Benz downsized the engine from the massive 5.5-litre V8 that was available with the previous generation car.

The new version gets a 9-speed automatic transmission AMG SPEEDSHIFT that transfers the power to all four wheels. It can do 0-100 km/h in just 4.5 seconds and can reach an electronically limited top speed of 220 km/h. Owners can get AMG Driver’s package as an optional add-on and can increase the speed to 240 km/h.