Skilled driver saves life of passengers from a wild elephant

News of wild animals attacking people have been reported from different parts of the country. Due to various reason, wild elephants have been spotted in areas recently where people live. There are several videos that shows how people have escaped from the attacks of wild animals. There are videos of elephants attacking and destroying things that came in its way. Here we have one such incident where a wild elephant is seen chasing a Mahindra Bolero. The video shows how skilled the driver of the Mahindra Bolero actually was and how his presence of mind actually saved the lives of the people in the vehicle.

I am told this is in Kabini ! Hats off to the driver 🫡 deft handling of the situation with a cool mind is commendable. Source- shared by a friend pic.twitter.com/rfCQbIjK1T

The video has been shared by Supriya Sahu IAS on her Twitter profile. The video she has posted was shared by her friend and it is said that the incident happened in Kabini National Park, near Mysuru. In this video, a wild male elephant is seen charging towards a Safari jeep. The Safari jeep seen here in the video looks like a Mahindra Bolero that has been modified for this purpose. There is a path built inside the national park for such tours of the guest. The elephant was standing in the middle of the road when the Bolero reached the spot.

As soon as the driver saw the elephant running towards the jeep, he quickly engaged the reverse gear and started driving it in reverse. The elephant was dangerously close to the vehicle but, the driver did not lose his calm. He kept on looking at the ORVM and drove the Bolero in reverse. The short video shows how skilled the driver actually is. He senses how dangerous the situation and without panicking he drives the car in reverse. Drivers of such safari vehicles are trained to handle such situation and they are constantly driving through a territory that belongs to wild animals. 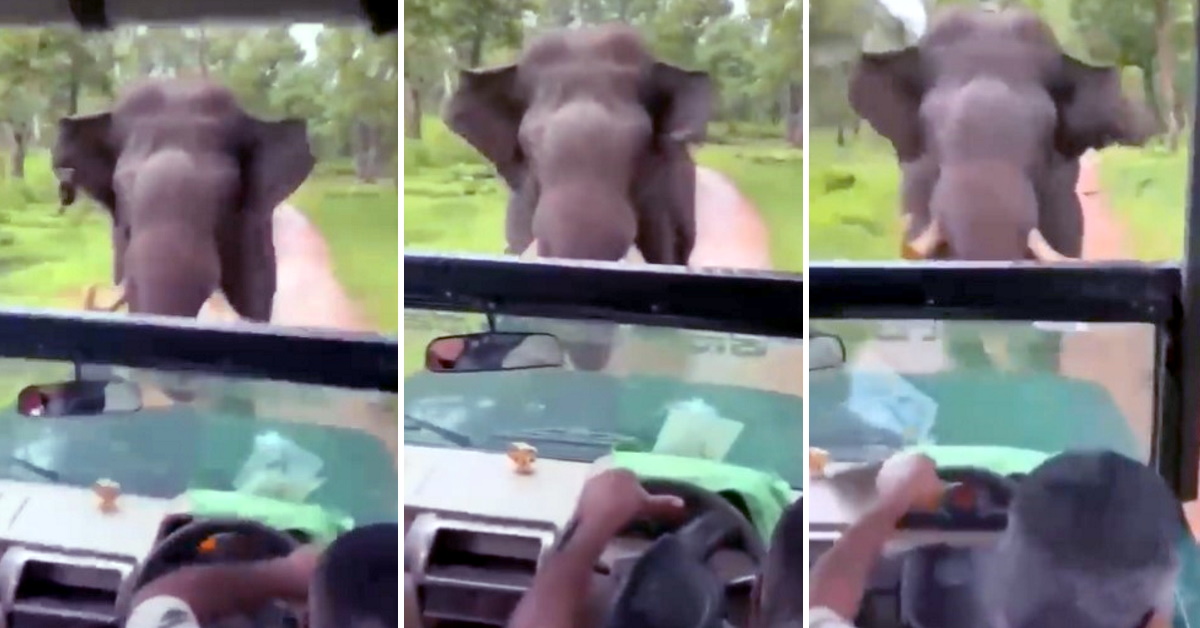 Why did the elephant chase the vehicle?

So, what made elephant chase the safari vehicle. It looks like the elephants was chasing other safari vehicles too and this could be because it was in “Musth”. Musth is a completely natural phenomenon seen in healthy adult bull elephants. Generally characterised by the secretion of a hormone rich substance called temporin from the temporal gland (on either side of the elephant’s head) and a steady trickle of urine down the back legs of the elephant, musth involves a rise in the reproductive hormones in the elephant’s body. This causes the animal to feel more restless, energetic, aggressive or unpredictable – and generally irritable and oversensitive to sounds and movements.