As we all know, electric vehicles are gaining popularity in India. The rising fuel prices and low running cost of an EV along with incentives from government are all factors that have contributed to its rising popularity. In the past we have seen several ownership videos of EV owners online and many of them have been featured on our website as well. When we talk about EVs, Tata Nexon EV is the first choice among buyers. It is the best selling electric SUV in the country for various reasons. Other than Nexon EV, Tata also has Tigor EV in the passenger electric vehicle segment. Here we have video of a Tigor EV owner who has been charging the EV for free.

The video has been uploaded by PluginIndia Electric Vehicles on their YouTube channel. The video talks to the owner of a Tata Tigor EV owner. In this video, the owner of the sedan works in automobile industry and he bought the Tigor EV sedan around 5 months ago. Since then, this sedan has been his daily driver and he has already completed around 12,500 km with this sedan. The owner talks about the things that he liked about the Tigor EV and also mentions the things which can be improved.

The owner mentions that he used to have petrol Tigor before the EV. He really likes the design of Tigor and that is why he opted for this. In comparison to Nexon EV, Tigor EV is almost 3 lakh cheaper and it offers almost the same amount of driving range due to the aerodynamic design. He can be heard saying that the electric SUVs do not return good driving range mainly because of their design. He drives the car daily for almost 60 km and he has never plugged the car to a fast charger. 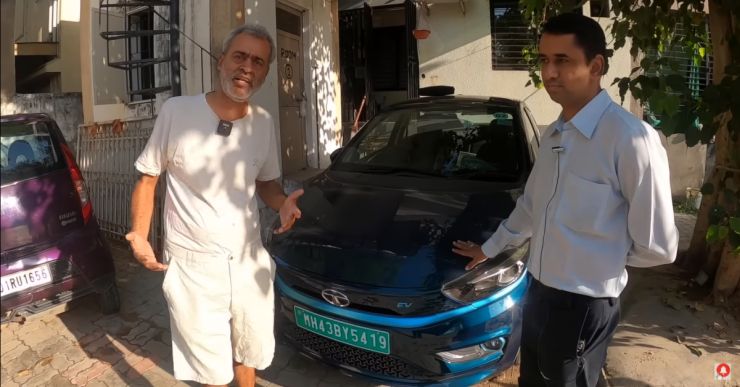 He has not spent even a single penny on charging as he has installed a 10KW solar panel set up at home. He always charges the car from his home. He has driven the car for almost 12,500 km and he is quite satisfied with the performance as well. He tells it on video that he is a rough driver and always has the car on Sport mode. The overall service experience from Tata Motors is also good for the owner. The owner even shows the solar panels that he has installed on his roof. The panels generate enough electricity to charge his car and also for his home appliances. This is probably the first Tata Tigor EV in India to run without any expense on charging.

There are some things that he wished Tata could have improved in Tigor EV. The first thing are the tyres. He can be heard saying that the wheelspin on these tyres is a lot but that could also be because the car is always driven aggressively. The owner tells that the customer should be given options between tyres to choose from. Next is quality of the interiors. Tigor EV is not a cheap car by any means, Tata could have made some changes to the interior to make it look slightly premium than the regular version. Other than this, the owner also wants a rear AC vent which is quite important for Indian summers.

As we all know, electric vehicles are gaining popularity in India. The rising fuel prices and low running cost of an EV along with incentives from government are all factors that have contributed to its rising popularity. In the past we have seen several ownership videos of EV owners online and many of them have…

Previous Post
Toyota Innova crosses 10 lakh sales in India
August 7, 2022
Next Post
This is how Tork Motors would service your motorcycles
August 7, 2022