This is how a bunch of 2WD SUVs performed off-road

Off-roading is an activity which is slowly gaining popularity in India. Lately, several SUV owners group have surfaced in different parts of the country. These groups are organising one day trips of off-road sessions for SUV owners so that they can explore the capability of their vehicle and improve their off-road skills. We have normally seen videos of 4×4 SUVs exploring off-road terrains and clearing obstacles easily. Here we have a video, where a bunch of 2WD SUV owners have come forward for off-roading in their SUVs. How did it go? Let’s check the video to find out.

The video has been uploaded by The Road Not Taken on their YouTube channel. In this video, 2WD SUVs and micro SUVs like Tata Punch, Tata Nexon, Mahindra XUV500, Kia Seltos and Jeep Compass tried to drive through multiple obstacles to see how their car performs. It must be noted that all the cars were in stock condition and none of these vehicles are meant to go off-road.

On the video, Mahindra XUV500 is the first SUV to face the obstacle. It was a downward slope after which there is immediately a climb to come out. The Mahindra XUV500 came out from the pit without any problem. As it does not get any off-road spec modification, the lower part of the bumper was touching the bottom while climbing up. After XUV500, pre-facelift Jeep Compass entered the track and faced the same issue. The approach angle on the Jeep Compass is much lower than the XUV500 and it was quite visible when it was coming up. 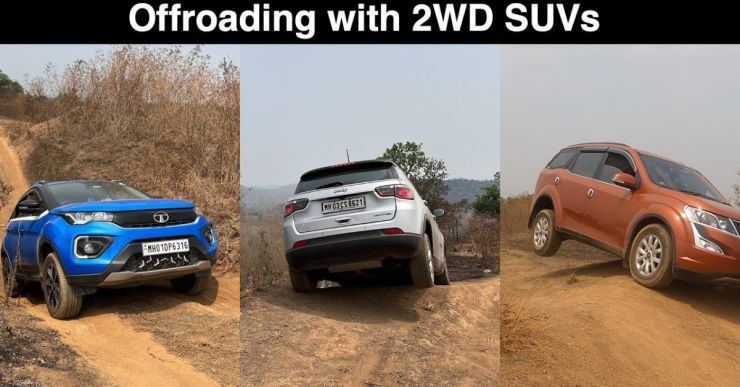 Compass driver could not maintain momentum while climbing up as the bumper got hit. He cleared the obstacle in the second attempt. After Compass a Kia Seltos came and even that faced the same issue as Jeep Compass. Spotter asked them to come down the slope slowly so that the bumper does not get damaged. Tata Nexon cleared the segment without touching the bumper anywhere. In the next obstacle, they SUVs had to climb up the slope which was uneven.

Mahindra XUV500 attempted the climb first but, halfway through the climb, the front wheels lost traction on the mud road and the driver had to come back and attempt again. Next was the Tata Punch, the micro SUV from the Indian manufacturer also had difficulties climbing up in the first attempt. Kia Seltos managed to climb up in the first attempt and so did the Tata Nexon. The obstacles kept on becoming difficult and some of the SUVs performed well while the others cleared it with some difficulty.

As mentioned above, 2WD SUVs are meant for minor off-roading like broken roads and patches. The ground clearance would be helpful in such situations. If the vehicles 4WD or AWD system, they would have cleared most of the sections in first attempt without struggling. In comparison to a 2WD SUV, 4WD SUV gets power on all four wheels and that helps them move forward without any major issues that these 2WD SUV owner faced in the video.

Off-roading is an activity which is slowly gaining popularity in India. Lately, several SUV owners group have surfaced in different parts of the country. These groups are organising one day trips of off-road sessions for SUV owners so that they can explore the capability of their vehicle and improve their off-road skills. We have normally…