This is how it feels like inside a heavy duty truck

Trucks and truck drivers play a crucial role in the economic growth of a country. They ensure timely delivery of goods from one point to others. There are trucks who cross several states to deliver commodities. Apart from the normal trucks on our roads, you would have also seen some trucks carrying heavy items. In the past, a truck carrying a component for Indian Space Research Organization (ISRO) was spotted on the road. These trucks are different from the usual ones and life of the drivers is also different. Here we have one such video, where a vlogger spends 48 hours in India’s largest truck with 148 wheels.

The video has been harry’s vlogs on his YouTube channel. In this video, vlogger spends 48 hours in truck that is carrying massive transformers. When the video started, the truck had reached Nagpur and was travelling North. The truck has to deliver the transformers in Agra, Uttar Pradesh. The goods that is transported is quite heavy. It is easily over 320 tonnes and mentioned by vlogger in the video. Not every truck can transport such heavy items on road. For this, they have special heavy duty trucks. In this case, the logistics company is using a Volvo FMX 520 heavy duty truck.

It is attached to a trailer on which the transformers are placed. The trailer is very long and it also has dedicated controls. It can turn the wheels left and right. It also has the feature to adjust the height of the trailer. The control panel for the trailer is at the end and a person sits there to make adjustments. There is an escort vehicle and there are more 8 people managing the whole thing. vlogger sits in the driver cabin and soon the truck starts moving. As the transformers are heavy, truck has to put a lot of pressure to ensure that it starts moving. In sections where the gradient is steep, another heavy duty truck is attached in front of this truck for assistance.

The truck is moving at a maximum speed of 35 kmph and on a single day, the team covers a maximum distance of 100 km. The truck has to be driven through highways as it would create a traffic jam in the city otherwise. Driver has to be extremely careful and every time a car stop in front of it, the driver has to stop the truck completely and will have to overtake after it gets clearance from the staff on ground. Special arrangements are made at toll gates to ensure smooth passage of the truck. The barricades are removed and there are people with red flags on the road guiding the driver to come forward. It is with coordination from every team member, the driver is able to drive the truck. 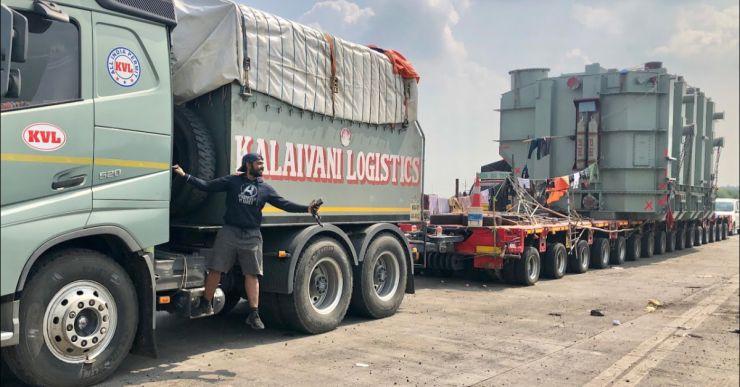 The truck is only driven during daytime and on first day, the truck was able to cover only 65 km and had reached Madhya Pradesh border. On second day, the truck could not cover much distance and there was a ghat section coming up. The truck would only resume its trip after the second truck would reach the spot for its assistance. He added a clip in his video where the truck can be seen with another heavy duty truck climbing the ghat section. Vlogger was excited and was very happy and calls it once in a lifetime experience.

Trucks and truck drivers play a crucial role in the economic growth of a country. They ensure timely delivery of goods from one point to others. There are trucks who cross several states to deliver commodities. Apart from the normal trucks on our roads, you would have also seen some trucks carrying heavy items. In…