This is how Tork Motors would service your motorcycles

Tork Motors recently started the production and delivery of their new electric motorcycles in India. The Pune-based electric vehicle manufacturer currently has 2 models Kratos and Kratos R in their line up. The manufacturer has officially started delivering the motorcycles to its customers. Currently, they are operating in Pune only. They will be expanding their network in future. Tork Motors does not have a dealership or service centre at the moment but, if you want to get your motorcycle serviced, then you don’t have to look for a service centre but, the service centre will come to you. Here we have a video that shows how Tork services their electric motorcycle.

The video has been uploaded by Pradeep on Wheels on their YouTube channel. The video showcases how Tork Motors deliver and service motorcycles at customer’s doorstep. They are calling their service vehicle Pit crew. It is a modified Force Traveler with all the essential items that their team would need to service the motorcycles. One can either get his motorcycle delivered in this traveler or also opt for a door step service.

There is an awning on one side of the traveler which can be extended with the touch of a button. This would provide shade to the customer and service personnel while taking a look at the motorcycle. Inside the van, there is a section where they have placed inverter and a desk with a computer can also be seen here. The system is used to check issues in the motorcycle and keep a track of it. There are separate partitions to keep normal tools and heavy duty tools. These tools are required to service the motorcycle. The Pit Crew van can transport 3 Tork motorcycles at a time. There is also provision to charge these motorcycles while it is being transported.

There is a ramp at the rear  part of the van that is used to load and unload motorcycles. There are CCTV cameras installed inside the cabin to keep an eye on how the vehicle is being serviced. The van also has an inbuilt WiFi connectivity and a tent is also placed inside the cabin which can be set up outside the van to service the motorcycle when needed. This pit crew service would be available to customers living at a location which is far from a physical showroom or service centre. The crew will visit the customer and get the motorcycle at their door step. 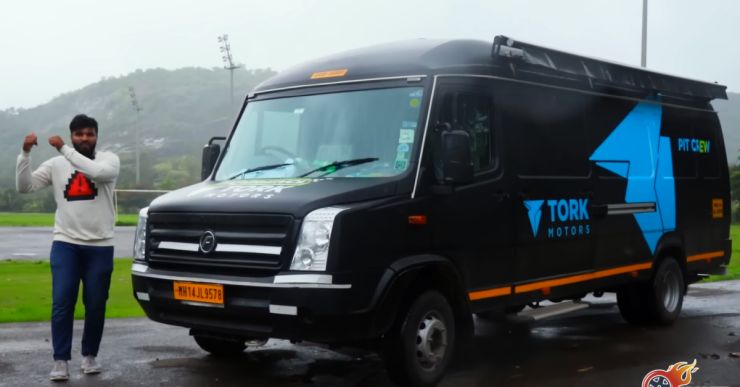 Tork Motors also offers special delivery to customers where in the motorcycle is delivered in a box just like a scale model. We have featured the video of the same on our website. Tork Motors has been working on the electric motorcycles for a very long time. Tork Kratos is India’s first indigenously designed and developed electric motorcycle. It gets  a very unique design which looks sharp and sporty. The bike gets a new trellis frame, telescopic front fork, rear monoshock, and disc brakes on both ends. It gets a 4.3 inch  TFT screen and other connected features and so on.

It is powered by a 4 kWh Lithium-Ion battery pack. The Axial flux motor generates 9 kW and 38 Nm of peak torque. It gets Eco, City, and Sports riding modes and like many other electric scooters, Kratos also gets a reverse gear function. Top speed of the motorcycle is 105 kmph and has a certified riding range of 180 km. The motorcycle supports fast charging as well. The price for Kratos is Rs 1.92 lakh, ex-showroom, while Kratos R is priced at Rs 2.07 lakh, ex-showroom.

Tork Motors recently started the production and delivery of their new electric motorcycles in India. The Pune-based electric vehicle manufacturer currently has 2 models Kratos and Kratos R in their line up. The manufacturer has officially started delivering the motorcycles to its customers. Currently, they are operating in Pune only. They will be expanding their…