Maruti Suzuki launched the all-new 2022 Maruti Brezza recently. It is different from the older version in many ways. It looks different, offers more features and is also expensive than before. In comparison to the older version, the 2022 model of Brezza looks slightly more premium. The car has started reaching dealerships and deliveries for the same has also started. Aftermarket accessories for Brezza have already arrived and people have started modifying their car as well. Here we have a Maruti Brezza which has been extensively modified by its owner.

The video has been uploaded by Harsh VLOGS on their YouTube channel. In the past, we have seen several video where Maruti Vitara Brezza has modified with inspiration from Range Rover Evoque. Some owners have even modified their Brezza to get the desired look. The owner of this SUV is also going for a similar approach here. He is not changing any body panels to achieve the desired look though.

In this video, vlogger has come to a workshop to a workshop to get PPF coating for the roof of his car. It is an gloss black film which may look like vinyl wrap but offers a lot more protection than that. Vlogger can be heard saying in the video that it a self healing film which will correct all small scratches automatically. We have spoken about the benefits of getting PPF on a car in the past. It protects the original paint of the car from scratches and also helps maintain the original glow. The vlogger mentions that the cost of installing PPF on the roof on the car is around Rs 12,000 and it would vary depending up on the model you have. 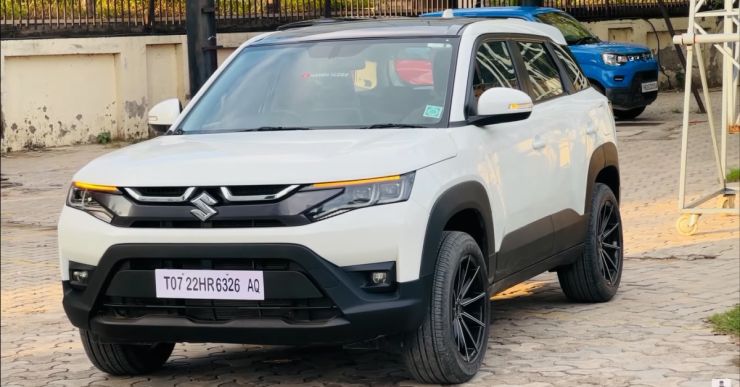 Coming to other modifications, the car seen here in the video does not look like a top-end variant. The skid plates are all black. The car however gets twin projector headlamps, LED fog lamps from factory. The main attraction on this Brezza however are the wheels. The stock 16 inch wheels on Maruti Brezza actually look very small on it. The owner has opted for a 17 inch gloss black multi-spoke unit. The rims are slightly wider and they offer a muscular look to the car. A new alloy wheel has completely changed the overall look of the SUV. It now looks a lot more sporty on the outside.

The blacked out alloy wheels with Red painted front brake calipers and the black roof is really lifting the look of the car. The owner has also done other modifications like installing LED lights inside the wheels which glow at night. Other than this, no other noticeable changes or modifications are seen on the car. Maruti Brezza top-end variant offers features like 360 degree camera, HUD, cruise control, new touchscreen infotainment system, electric sunroof, wireless phone charging pad, connected car features, black and brown interiors, premium sound system and so on. It uses a 1.5 litre smart hybrid petrol engine which comes with a 5-speed manual and a 6-speed automatic transmission option with paddles shifters.

Maruti Suzuki launched the all-new 2022 Maruti Brezza recently. It is different from the older version in many ways. It looks different, offers more features and is also expensive than before. In comparison to the older version, the 2022 model of Brezza looks slightly more premium. The car has started reaching dealerships and deliveries for…