This modified Maruti 800 wants to be a Volkswagen Golf Mk1

Maruti 800 is an iconic car in the Indian car history. Maruti manufactured 800 for 31 years and it is still a car with second longest production in India after HM Ambassador. The production for Maruti 800 started in 1983 and continued till 2014. Even today, there are many car owners who have a Maruti 800 in their garage. It is a very rarely spotted car on the road as well. Maruti 800 was introduced as a family car with modern design at that time. Now, people have started looking at it as a collectible and many of them even use them as project cars. We have seen several examples of neatly modified Maruti 800 hatchbacks from different part of India and here we have one such 800 with Mark 1 Golf inspired modifications.

The video has been uploaded by GOKZ MOTOGRAPHY on their YouTube channel. The video talks about all the changes that are done to this 1994 model Maruti 800. The modification work on this Maruti 800 was done by Project D Works. The video mentions that the owner approached the workshop for modifications and wanted to do it within a tight budget. This was a second generation Maruti 800 it had some mechanical issues as well. All those mechanical problems were solved as part of this modification.

The modification garage then came up with an idea to give it a Volkswagen Mark1 Golf like looks. The overall boxy design of the Maruti 800 would suit the look very well. The stock front grille and the rectangle headlamps on the hatchback were removed and replaced with round headlamp and custom made Mark 1 style grille. The grille covers the front-end of the car completely. Coming down, the bumper on this car remains stock but it is now painted in the same shade as rest of the car. Lower part of the bumper gets a sporty lip which was common in classic cars. This new lower lip also gives it a sporty look. 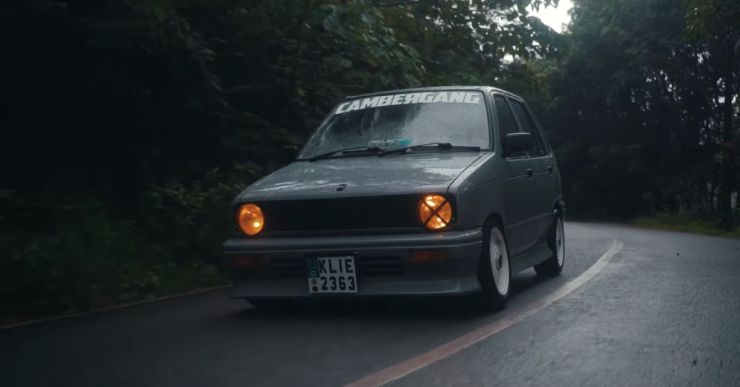 Another major change on this car was the bonnet. The second generation Maruti 800 had a different design to the bonnet which did not give the desired look. This was replaced with an older generation bonnet. Coming to the side profile, the car gets 14 inch aftermarket alloy wheels. The wheels were initially chrome units but, they were repainted in white to give a contrasting look. The front suspension on the car has been slightly lowered and the rear remains in the stock position. There is a side skirt installed in the car to enhance its overall stance.

The rear profile of the car also gets some modifications. The stock tail lamps on this Maruti 800 were halogen units. This was replaced with smoked custom made LED units. There are no other changes visible on the car overall. The whole car has been finished in Nardo Grey shade as the owner did not wanted to have a bright colour which would make it stand out. The interiors on this car have also been customised. The seats are wrapped in Red colour custom seat covers and there is a aftermarket steering wheel from Momo brand. The work done on this car looks very neat and is different from what we have seen so far.

Maruti 800 is an iconic car in the Indian car history. Maruti manufactured 800 for 31 years and it is still a car with second longest production in India after HM Ambassador. The production for Maruti 800 started in 1983 and continued till 2014. Even today, there are many car owners who have a Maruti…