Volkswagen Polo is one of popular hatchbacks in its segment. It is a popular car in modification circle and we have seen several examples of neatly modified Polo from different parts of the country. Volkswagen used to offer a performance version of the Polo which was known as GTI in the market. It was available in limited numbers only. It is different from the regular Polo as it was available in 3-door format and came with bigger and more powerful engine than regular Polo. Volkswagen GTI or Polo GTI is rarely spotted on our roads as only 99 units were sold in India. Here we have a modified Volkswagen GTI that generates 330 Bhp.

The video has been uploaded by The Drivers Hub on their YouTube channel. In this video, vlogger talks about the modifications that the owner has done to this particular GTI. Before talking about the mods, he quickly talks about the exterior. On the outside, it would look like a regular Polo. The differentiating factor is the red accent on the grille that is extended inside the headlamp as well. The headlamps are also smoked for a sporty appeal. A GTI badge can also be seen on the front grille. The bumper on the GTI was also different when it came. However, Volkswagen introduced the same type of bumper for later versions of normal Polo.

Coming to the side profile, the owner has replaced the stock 16 inch alloy wheels. The car now gets a set of 17 inch aftermarket alloy wheels with Michelin Pilot Sport tyre. There are no other noticeable changes on the side profile. The major difference here is the door. The car gets only one door on each side. It is a 2-door, 4-seater hot hatchback. The tail lamps are similar to what we used to get with the last version of Polo TSI. There is a twin tip exhaust in the car as well. 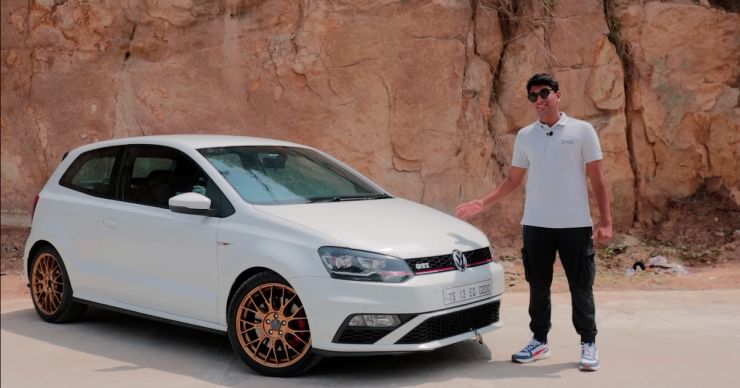 Coming to the mods, the Volkswagen GTI seen here may look like a stock car but, there is a lot going under the hood. The car is powered by a 1.8 litre turbocharged petrol engine. The engine is Stage 3 remapped and it now generates 330 bhp and 420 Nm of peak torque. It must be noted that the stock GTI used to generates 189 bhp and 250 Nm of torque. The stock turbo on this car was replaced with a bigger turbo. It now uses turbocharger that is offered with Octavia vRS. The air intake system has also been upgraded. The car now uses NGK iridium spark plugs and it also gets a full system exhaust from Milltek. The intercooler on this GTI has also been upgraded for better heat management.

Just like the exterior, the owner of this car has kept the interior of this hot hatch in stock form. The flat bottom steering, sporty looking instrument cluster and GTI seat covers are all retained. The car only shows its true colours once you start driving it. The exhaust is quite sporty and vlogger mentions that it feels extremely fast for a car of this size. The person driving this car would have a smile on their face once they press the accelerator. The car is still running on the stock DQ200 gearbox and the owner is currently looking for DQ250 transmission which is more reliable.

Volkswagen Polo is one of popular hatchbacks in its segment. It is a popular car in modification circle and we have seen several examples of neatly modified Polo from different parts of the country. Volkswagen used to offer a performance version of the Polo which was known as GTI in the market. It was available…